The Joy of Journaling 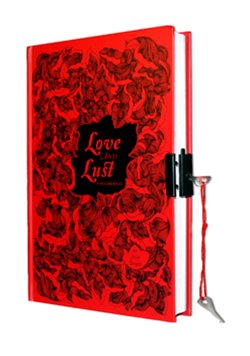 http://www.chroniclebooks.com/blog/author/susie-bright/
Have you ever thought of sitting down and recording your most intimate moments on paper? You should - you might be surprised at how much you discover.
One of the greatest gifts I have been given over the past few years was a journal; Susie Bright’s Love and Lust. The premise is simple - generally blank pages, headed occasionally with a variety of titles and topics designed to inspire your creative juices to flow.

I’ll be honest and say, I didn’t really need a copy. I’ve been keeping journals since I was old enough to hold a pen; and keeping a sex journal since I was old enough to dream about holding a penis. My fictional writings haul old memories out of storage, my non-fiction generally draws on experience as well. My copy of Love and Lust does not remain blank, as I’ve found it a useful place for making notes and observations. More than that, however, it reminds me of just how much fun it is to maintain such a journal.

There are, I think, a lot of reasons not to spend time setting down your most private thoughts and experiences on paper. Or on your hard drive. Everything from privacy to security is a genuine concern, but beyond that, it can actually be very difficult to sit down and start to write about the things you’ve done, the things you’ve dreamed, the things you’ve planned. Even speaking in non-sexual terms, that can be a hard ask. Battering down all of your own personal feelings, about your most intimate moments, is even more difficult.

It can be rewarding; informative even, because opening your eyes to the things you have done can also open your heart to the things that you’d like to do. Which, I’m sure you will say, is what you do in your fantasies. But putting them down on paper allows you to marshall your fantasies, easing into a reality that takes place outside of the sometimes fleeting realms of your imagination and into a more concrete arena.

Remembering, or imagining, how a sensation feels is very different to actually describing it on the page, and it doesn’t matter whether you believe you have the vocabulary or the learning to record your thoughts coherently. You are the only person you are writing for; you are the only person who needs to understand it. (But one word of caution. I have a friend who invented her own shorthand for writing in her journal when we were at school. The downside was, a decade later, she could not remember how it worked.)

As I said, I started my journaling long before I had actually done anything worth journaling about. I’d hear things at school, or read something in a magazine, and I’d note it down with any thoughts or considerations that the act itself suggested to me. And looking back at them from so many years later, it surprises me to see just how much instinct leaked through my meanderings - meaning, even without anything concrete to base my assumptions upon, my mind had already grasped certain mechanics, and the only variables tended to be my thoughts on how a partner would respond to them.

Some girlfriends and I were talking among ourselves about how a woman became pregnant and one of them ... bearing in mind, we were all only ten or eleven... announced, with an authority that it was difficult to argue with, that there were just two ways. “In your hole or in your mouth.”

To which the rest of us nodded. It made sense. So much so, that nobody argued or even thought any more about it. We just took this fact for granted and when high school introduced our first sex-ed classes, nothing we heard there gave us cause to doubt it.

In fact, one day I made that same observation in class and I now see how the teacher used my ignorance to reinforce her main (in fact, only) point. It didn’t matter where a man put his penis, he should always wear a condom. And what were condoms for? To stop you getting pregnant.

I noted my first ever encounter with a condom, when a friend produced one she'd found in her brother's coat pocket. Up in her bedroom, we spent the rest of the evening being utterly grossed out by the slimy, smelly, slippery, smelly, slithery... did I say smelly?... thing. Birth control? This was sex control and probably vomit control as well. Because the idea of having something like that anywhere near my body was disgusting. And if the thought of it in my pussy was revolting, the idea of having one in my mouth was enough to make me gag.

I’m looking at a page that’s maybe ten years old. I was still at college, anyway, and the first words at the top, in bold, bright, red ink, declare NO FUCKING WAY. Underlined three times. But they are followed, all the way down the page, by random sentences, quotes from books and articles, scenes from movies... it probably took me six months to fill the page, but there at the bottom is a brightly colored smiley face and a single colorfully decorated word. “Tonight.”

Six months. I was with a different guy by then, and he had never even broached the subject. But I had turned my mind around, and today, the act (which is going to remain my secret, although I have written about it in a past article) is just another part of my regular repertoire.

Would it have become one if I hadn’t argued with myself? If I hadn’t kept a journal? I can’t say, but somehow I doubt it.

You don’t need to be that in-depth, of course. For some people, a journal serves its purpose if it is used simply to write down the events of the day... and, of course, the night. A function, you may or may not be surprised to learn, is now catered for, by at least a couple of different apps. There’s the iPhone’s BlackBook, which allows you not only to note down time and place, but also such crucial elements as were you drunk, did you cum, did you use a condom and how many stars you would give to the experience. Oh, and you can add photos and phone numbers, too.

“Hold on, I just need to finish my review of the last time.”

There are probably other apps available, or in development at any rate, and I would love to hear from anybody who has been using one for a while. Also, if you wish, why you do (or don’t) journal. For me it is a love of writing, a love of discovery and perhaps a form of self-analysis. But it is also, certainly, a way of remembering. If a lover seemed important enough to want to spend some time with, whether it was a relationship, a one night stand, or just a quickie with a stranger in the back seat of his car, then whatever transpired must also have been important. At least at the time.

You can take things as far as you wish. A spreadsheet of your favorite activities, how often you’ve done them, and where they took place. A day-to-day calendar of significant first times, so you know when to send a birthday card to the memory of your first swallow. An encyclopedia of emotions to draw upon for all manner of occasions - I use mine in my fiction writing, but that is just one possibility. You will find plenty of others.

The important thing is... well, there’s two. First, if you want to keep a journal, start to keep it now. You’ve already let a lot of experiences slip into the past, don’t let more go the same way. And secondly, if it makes you feel more comfortable, don’t think of it as a journal, and don’t feel that you have to fill every page with your own thoughts and fantasies. My journals contain news cuttings, internet print-outs, photos, drawings, cartoons, adverts... until it becomes less a journal of my sex life, and more a study of the culture in which that sex life takes place.

I am horrified that primetime television can broadcast hospital and cop dramas in which people die lingering, graphic, dreadful deaths, at the same time as a pair of female nipples is considered too disgusting to show on screen.

And I am thrilled to think, that after reading this article, you might pick up pen and paper (or keyboard and screen, or app and fingertip) and set out on your own voyage of personal, sexual and cultural discovery.

Just remember one thing, please. Keep it safe. Mine’s locked away in... hahaha. You’re not going to catch me out that easily.
Tags:
Views: 1428
Related articles