The Loneliness of the Long Distance Sex Writer 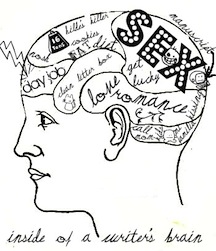 http://thepenandinkblog.blogspot.com/2012/01/writers-brain.html
A lot of us here have written something that other people disagree with. All of us have read things that make us see red. Some thoughts on the nature of criticism, and why sex writers make such a popular target.
“And what would your boyfriend say if he found out you wrote things like that?”

Now, she was asking me the one question that probably everyone who writes about sex, whether fiction or non-fiction, is probably accustomed to hearing. Or, if not that exact question, then something conveying similar disapproval.

If you wrote murder mysteries, people would not automatically assume you’re a killer (or a cop).

If you wrote historical romances, they would not imagine you whirling back and forth through time, enjoying heart-pounding liaisons with Napoleon and Caesar.

But erotica and sex? If you write it, they believe, you live it, and the only other field I know of where readers will make the same assumption is medicine. A friend’s father played a bit-part doctor in a TV hospital drama, back in the 1980s for the lifetime of the series and for a few years after, as well, even comparative strangers would contrive conversations, simply to ask his opinion of some worrying medical complaint. I told him it was a testament to the conviction with which he played the role. I’m assuming a good sex writer is being afforded a similar courtesy.

There’s a difference, and I’m assuming we all understand it, between a writer who puts him or herself into the writing, and those who are essentially rewording articles they find on Fetlife and Wiki. Just the same as, among the questioners, there is a difference between people who are genuinely intrigued by the subject and are looking to debate it further, and those who just want to score cheap points and much-needed self-esteem by picking holes in somebody else's lifestyle.

One of the best pieces of advice I ever received as a writer was, “everyone’s a critic.” And the majority of them are hostile critics. The internet has simply amplified that. It allows more people to write, which is a good thing. And it allows more people to complain about that writing, which is also a good thing, especially if the complaints are helpful, or even viable.

But being told you are a disgusting slut, because you wrote a scenario that the reader him- or herself would not want to be involved in; or being criticized for writing a single sentence that the reader either misread or misconstrued, in the first place, is not helpful to anybody beyond the complainant, who at least has got their rage off their chest. For the writer, and anyone else who reads the remark, the whole saga is simply puzzling.

I was reminded of this on a social media site a few days ago, in the aftermath of Margaret Thatcher’s death. The English rock singer Billy Bragg, one of her most vociferous critics throughout her reign, and one of the best-known musicians of his generation, was discussing the need of a large and very vocal slice of the British public to celebrate her passing (While sending “Ding Dong The Witch Is Dead” to the top of the download charts). He was touring North America at the time, and his posting was date-and-place stamped Ontario. And there, nestling loud and proud among the comments that followed, was somebody complaining loudly about “no-nothing (sic) Canadians spouting off on subjects they have no business talking about.”

Another example. The Russian Femdem movement, using the same social media platform to keep its followers informed of its actions. Visceral images, powerful text, and a righteous rage that we all should support. All of us, perhaps, except for the man who posted “You ladies really need to get someone with English as their first language to write these updates."

In isolation, and within the narrowest confines of a pedantic worldview, he may have a point. But just like you wouldn’t walk up to an armed response unit and suggest they polish their boots a little better before stepping out in public; or buttonhole Evan Stone on set and tell him his penis would look better if he could just correct that left-sided lean, there is a time and place for all opinions and sometimes you have to choose them carefully.

Of course, the counter argument to all of this is, if you are going to place your thoughts in a public forum, then the public has a perfect right to offer up its thoughts in response. Regardless of whether or not they are well-balanced, measured or even vaguely relevant to the topic. Furthermore, if you present yourself (and all writers, apart from the aforementioned copyists, are presenting at least a shadow of their true selves) as being qualified to write on a subject, whether it’s fictional or otherwise, then other people are qualified to question your qualifications.

The important thing is, you have to take the rough with the smooth; and, in the world of sex writing, at least, writers must accept that it is impossible to float everybody’s boat. Just as their readers must acknowledge that it is equally impossible to have your own boat floated by everything you read. We are all experts in the topics we are experts upon, and we’re all varying shades of ignorant about everything else. Remember that next time you have a snarky comment to deliver; remember that the next time you don't bother checking a fact you're not sure of.

As for why sex writers (and medical actors) are regarded as being especially knowledgeable and/or experienced in their fields, and as such, surely live the precise same lives as their fiction sets out in such detail, well, that’s easy. Sex (and medicine) are subjects that concern us all, and in which, to some degree, we all seek reassurance and applause.

In those realms, the girl who goes through college knowing that an ex has spread the rumor that she’s “a lousy lay”, has as much cause to worry as the guy who walks around with a persistent cough. They might not be ready to seek advice from a bona fide professional, but they will grasp at other people who seem to know what they’re talking about. A writer whose imagination presses all the right buttons; an actor whose demeanor packs the necessary calm and assurance.

So it’s a natural assumption and ultimately a compliment. Except when it comes from your mom.

“And what would your boyfriend say if he found out you wrote things like that?” was the question she asked