Why Would You Want To Do That? 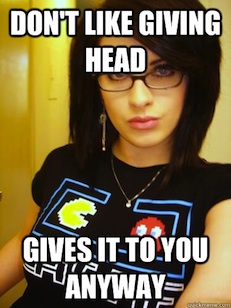 http://www.quickmeme.com/meme/35mbo5/
There are a lot of surveys out there asking for our thoughts and feelings about giving head. But what sort of answers do our interrogators expect?

I think we all, long ago, came to the conclusion that, without cats and sex, the internet, as we know it, would be dead. And, let’s face it, we all enjoy questionnaires. Even (or should that be “especially”) the rude ones. But it still amazed me, just how many people wanted to know the answers to a few specific questions. And how many more, secure in their online anonymity, were willing to answer them.

How old were you when you first sucked cock?

Did you enjoy that?

Did you want to do it again?

How many different men have you blown since then?

Some seemed defiant. “Yes, I do/don’t like it. So what?” Others seemed guilty: “I really didn’t think I’d enjoy it but....” Very very few felt unequivocal, and that surprised me, because if the last few years of “sex advice” writing have told us anything, it is that oral sex has either become so devalued or so boring, that it is now widely regarded as no more consequential than a goodnight kiss.

Look again at those dates, though. Even the most recent was close to forty years ago, and if you then consider that the Lewinsky affair is now around a decade and a half in the past - well, of course attitudes have changed. That’s a long time for anyone to keep such a delicious thing secret.

But just because a secret is “out there” does not mean it is necessarily easier to explain. And that is where the guilt, the defiance and - this is the word that we are going to try and define here - the mystique still lay. Because we can joke and smirk and discuss the pros and cons all day. Still no words and, to be honest, no photographs, film or even first-hand voyeurism can capture, let alone negate, the depth of intimacy that the act entails. The deployment not only of the usual five senses (all of which are in overdrive the entire session long), but of a few more you’re not otherwise cognizant of. The intricate and so delicately balanced awareness of another person’s body and your total command over the sensations he feels. And, yes, the knowledge that you are offering a gift that a lot of guys still feel awkward about asking for. As the informal questioning of some of my friends recently revealed (see, I told you we all love questionnaires).

But from the cult of the Greek demi-goddess Empousa; through the Egyptian myth of Osiris and his sister (he was cut into pieces, she brought him back to life by blowing a reed she placed between his legs); onto Cleopatra’s fabled fellating of a hundred Romans in a night; and onwards and onwards through time, women not only sought out the opportunity to wrap a tongue around a tool, they relished it as well. And no, it wasn’t simply a power play, because we all know that a guy is far more pliable when he’s hoping to get his dick sucked, than when he’s actually having or had it done.

No, it was just something that girls didn’t talk about. And our silence was construed as passive disapproval. Or as reinforcement of that age old canard, “nice girls don’t.”

Which brings me, finally, to the survey I was searching for when I started this article, which turns that argument around on its head and insists that actually, nice girls do all those things and more. A 1993 French report, “Sexual Behavior In France” by A. Spira and N. Bajos, that declared the majority of women who willingly give head, tend to be educated, smart, and well-to-do.

Which is separate to another report, from around the same time (and which I can only find anecdotal reference to), which claimed that two out of three women perform oral on a regular basis, out of a sense of obligation, and that only one-third of us do it because it’s fun.

I’m not an expert on demographics - I really cannot say whether or not those two sets of statistics contradict one another or not. But somehow, I’m having trouble believing either one; the notion that “smart girls like sucking cock” immediately prejudices every college graduate who doesn’t, not to mention every high school drop-out who does. And the idea that two-thirds of women do it out of a sense of obligation will probably be laughed out of the room by any guy who has ever tried to convince his girl to do something she doesn’t want to. If he can’t even persuade her to go to the auto show with him, what hope does he have of cumming in her mouth?

But I do wonder whether there is a “certain type” who favors giving head more? And, if so, what is it?

A woman who is in tune with her own body’s requirements? There is growing scientific evidence, to match several millennium of folk belief, that both male sperm and the pre-cum that precedes it, contain natural ingredients that aren’t simply healthy, they can also help combat various physical and psychological ills.

A woman who knows what she wants and gets it? Vague, but worth considering. It would certainly make an interesting question for, say, certain politicians.

Other theories abound - some are distasteful, some are laughable; all have been voiced seriously by researchers and commentators over the years. “The fulfillment of a certain kind of rape/violation fantasy." “The natural feminine instinct to submit." Or, delightfully contradictorily, “a rebellion against the accepted standards of femininity." I’m putting these in inverted commas because I can’t reach the trashcan from here, and there are plenty more where they came from.

So many theories, so many attempts to answer the question. But you know what? I’m beginning to think it might simply be one of those great unanswerable conundrums, along the lines of “how heavy is a box of books?” or “how long is a piece of string?” Offhand, still sipping only my second coffee of the day, while contemplating my third cigarette, I can think of half a dozen reasons why I love sucking cock, not one of which has anything to do with education, status, wellfullness, rebellion, self-disgust or even the fact that I still chew pens and pencils, even when I’m working at my laptop.

How about you?
Tags:
Views: 1688
Related articles