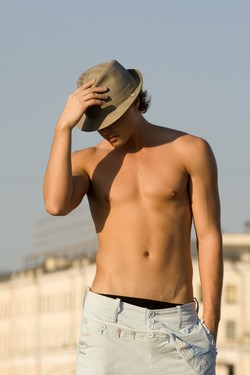 In the last few years the media has become inundated with stories about sex workers: feminist sex-workers; high-end, blogging call girls; coerced trafficking-victims. But in each, the buyer remains faceless. Even the word “John” conjures a shady, hidden, back alley-image. This is what I set out to uncover.
Tapping into Craigslist and online “hobbyist” communities, I interviewed dozens of men that buy sex, giving them a chance to tell their personal stories. My hope was not to gloss over real instances of violence and abuse, but to understand each buyer's individual story. I wanted to remove those shadows so we could all see a little more clearly the legal issues of sex work. My first question was: “Who are these men and why do they do it?” Yet each person I met was incredibly varied.

Melissa Ditmore, PhD and editor of the Encyclopedia of Sex Work and Prostitution says this has always been the case: “There were guidebooks from many parts of the country detailing the locations of brothels and reviews of the people who worked in them. Many of these were intended for relatively wealthy 'sporting men' in the 19th century. But clients come from a cross-section of society — no group is absent.”

The first time Matthew had sex was on his 18th birthday. “A gay friend of mine found out that I had never been laid — he was kind of appalled” he explains. So, on Matthew's birthday, his present was a session with a sex worker. He was ecstatic. “I kind of pleasantly went off the deep-end. She was just perfect. I felt like I was going to float off my chair.” Up until this moment, Matthew had believed sex just wasn’t going to happen for him. He was born with cerebral palsy and when he hit puberty, he remembers his grandmother warning, “love is something you just won’t experience.”

Matthew has lived his entire sexual life, having only been with sex workers. He is quite monogamous about it, seeing the same woman for years at a time. Talking with Matthew, I get it: he needs someone he can trust, who can help lift him out of his chair and get around, seeing new girls means having to explain his disability again and again. “I know a lot of people like being impersonal, but I manage from a different angle. For me, if there is no connection, there is no point,” he says.

Chris Atchinson, the researcher behind John's Voice, a study that focuses solely on buyer's experiences, and truly the first of it's kind, found similar sentiments in his research: “A lot of my samples did express that they got simple companionship and intimacy that they wouldn't have otherwise.” Slightly over a quarter of the men in John's Voice reported that sex workers had been the only source of sexual intimacy during the last year, and 66 percent reported having sex with the same sex worker in that year.

Stephen, a photographer explains the craving for closeness differently. “After the first time, I wrote a poem about it. It was actually very moving to find that I could have a genuinely intimate experience with somebody I didn’t know. You go to their place and you get to see who they are, where they live, the alter to their boyfriend. For a moment you’re thrown into the life of a stranger in an intimate way.”

Matthew has loved all his sex workers and recounts really falling the first time. “Every other word out of my mouth was, ‘I wonder what she is doing now?’”

Stephen sees this as a dangerous line. “A client falling in love with a sex worker is very common. The sex worker can just move on, stop doing sex work and you are left to deal with that loss. You've got to remember that when you stop paying them, they stop seeing you, but it can be hard to keep this perspective.”

According to Ditmore, men have historically gone to sex workers for a variety of reasons: “Sex workers offer sexual experiences, companionship and entertainment. This takes many forms, often in response to local legislation. For example, there are a huge variety of sexual services sold in Japan that include bathing, massage, and nearly everything you can imagine short of penile penetration.”

Of course for some, it's purely about fulfilling a sexual desire — or a fetish. Garret, a journalist, fits this mold. “I was looking on Craigslist and found a female model who offered a bunch of different things: personal training services, African history lessons, pre-colonial history lessons... ass worship. And so, I emailed her, like, ‘Hey, listen. I like all the other stuff you offer but I’m kinda curious about this ass worship.’” Stephen too, is fulfilling a sexual desire he can't get at home, as he pretty much solely sees a transgender woman.

Some men were quick to nix any idea that there was any emotional intimacy. Nick, an ex-vet says: “I see sex workers just for sex. It really is that simple. The act is quicker, and more awkward, of course I would prefer with a partner.”

Even though it's “just sex” for Nick, it was also about gaining experience. “It certainly made me more confident with women, it added to my knowledge of not only sex but women in general. Of the 400 to
500 women I've seen, there are no two I would characterize as the same.”

As I interviewed men about their experiences, I learned about their impressions of sex work growing up. “I was always intrigued by prostitution. This tingle would run through my body when I see someone on the street. I grew up in Wicker Park in Chicago, and there were a lot of streetwalkers. I wondered what their stories were. It was titillating, as a kid” says Adam, an artist who first saw a sex worker at 19.

Seeing sex workers, by virtue of it's illegal status, is a risk-taking behavior. Some studies now show that inclination to risk-taking behavior might be wired into the brain — linked to pleasure centers. But it seems to depend on a person-by-person basis whether or not the calculation of the risk makes logical sense. For people like Matthew or men who are so painfully shy they can hardly talk to women, it can add up empirically. But for many, the element of danger seems to be a factor.

“There’s something about meeting somebody and deciding to trust them even though there’s potential dangers — for the client as well as sex workers. There’s something to just knowing that sex is available to you, with a person who’s attractive on various levels, whenever you want. You just have to be willing to pay for it,” says Stephen.

Adam says his attraction to seeing sex workers, especially on the street, somewhat comes from the risk, “I wanted to know what it was like to have an orgasm with someone on the street. I knew it was 'dirty', I knew it was illegal and that was kind of thrilling.”

“There is a tendency within academic discourse to see things in binaries, good-bad, male-female” says Atchinson. After interviewing these random sex buyers, I see there is so much more to it than black and white, more than some dark image replaced by a brighter one. I started to get the picture of the complex human beings behind the “John” role, and it only opened more questions: morality, trafficking, violence, marriage and legality. Would there be prostitution in a sex positive world? Each “John” with his different background, experiences and beliefs had his own idea.
Tags:
Views: 2217