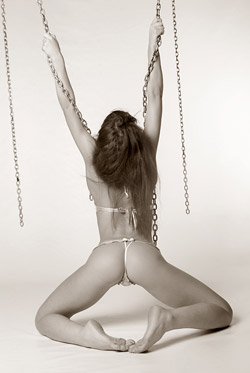 What exactly are we talking about here? Traditional hook suspension involves hardware that looks like overgrown fish hooks (without the barbs). Typically, the chest is pierced just above the pectorals, one hook on each side, and the individual is then raised up off the ground by chain or rope attached to the hooks. Other types of hook suspension get more intricate, sometimes involving dozens of smaller hooks deployed across the front or back of the body and then used simultaneously to distribute the weight of the body evenly.

It's not as “out there” as you might think. The practices of receiving multiple painful ear cartilage piercings and stretching one's lobe piercings to accommodate large-gauge jewelry are now common, as are full sleeve or back tattoos requiring hours of intense pain to achieve an aesthetic result. Many people who engage in these practices do so either to commemorate a major life event or challenge themselves to endure the practice itself, or a combination of both – much like the common reasons for hook suspension.

But isn't there a difference between an earring and a hook? Is there? The only underlying difference is that hook suspension does not result in a permanent aesthetic reminder. It's experience-based, and as such might owe more to the history of coming-of-age or endurance rituals than the watered-down mainstream piercing-and-tattoo culture that now co-exists beside the piercing-and-tattoo culture more deeply entrenched in experiential, self-challenging, “urban primitive” notions. Or, looking at it from another perspective: if you can appreciate a marathon as a culmination of grueling physical and mental training, purely done as an accomplishment to prove to the participants and others that they can, why look at a hook suspension scene any differently?