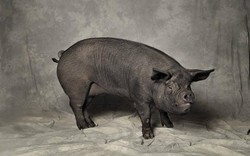 Days of Future Past

So, now that we have reached the end, we must go back to the beginning, and once again ask the question: Does sex influence fashion, or does fashion influence sex? The answer is a serpent eating its own tail.

Each succeeding generation of the 20th Century spawned idols, male and female, whose sense of style both defined and was, in turn, defined by the strictures of the contemporary culture in which they lived. However, whether they choose to embrace, embody and elevate current vogues, as in the case of a Jackie Kennedy, or like punk progenitors Malcolm McLaren and Vivienne Westwood, hijack, harvest, and hatch fashion anew, the end result was that trends in sex and fashion were intrinsically linked to recycling cycles of boom and bust, bust and boom, war and peace, peace and war—with a healthy helping of emerging technology to oil the wheels of progress, regress, dearth and excess along the way.

Nothing new. It’s been going on since the history of recorded civilization.

In the B.C.E., got up in the finest glad rags of her day, Cleopatra was legend at bending men to her will, but back then, the world was a smaller place. (Imagine what the Queen of the Nile could have accomplished had she access to a Facebook page.) Though eons from the Internet, in the 1880s, a solitary woman was capable of a having a worldwide impact on fashion via the available media of her day: When legendary actress, mistress and seductress Lillie Langtry made a public appearance, not only could she transform a simple black frock into a fashion statement that spoke the language of love loud and clear, she could count on telegraphing her tastes from Piccadilly to Park Avenue.

At the turn of the 20th century, artists’ model Evelyn Nesbitt—a cunning mélange of naughty and innocent, and the inspiration for the legendary Gibson Girl—epitomized the luxury of her era. Her an anatomically incredible hourglass figure would one day be refracted to greater lengths of mathematical improbability by 1940s pin-up illustrators, such as Alberto Vargas; in the ’50s and ’60s with the debut of the Barbie Doll and Russ Meyers’ DDD-list film heroines, and more recently, in the person of über-Barbie Doll-cum-MILF, Vice Presidential candidate, Sarah Palin.

On the flip side, the Roaring Twenties glorified gals who were built like boys, renowned for their loose morals (and all that jazz), but girls—and guys—of more mutable gender was also a recurring 20th Century theme. In the ’40s women started to put on their pants the same way that men did—one leg at a time. In the ’60s, style once again dictated that models must be wide-eyed and rail thin. In the ’70s and ’80s, sexual identities, morphed more than all the alter-egos Sacha Baron Cohen and an entire evil planet’s worth of Transformers combined. The ’90s saw heroin chic and the Hollywood Starlet Anorexia Brigade worshipped as high priestesses of fashion.

Is Now the Winter of Our Discontent? What About Now? Now? How ’bout Now?

Time passes. In a month or two, summer will give way to fall, and fall to winter. The coming year will mark the end of the first decade of the 21st Century. What have we learned?

Snatch this pebble from my hand….

The cult of celebrity so carefully nurtured and husbanded, cajoled and exploited by the invasive and overbearing media to feed the ever-more voracious public demand, is fast evolving to become the cult dead celebrity. Two fashion icons—both famous for wearing red—recently passed on the same day (although, sadly, the ubiquitous hoopla circus following the demise of Michael Jackson stripped Farrah Fawcett of her just final due). As an artist’s work increases in value posthumously, nothing ensures a permanent place on the pantheon of vaunted style like that final—and often premature—trip to the vault. Amelia Earhart. Marilyn Monroe. James Dean. Heroic figures reduced the image on a postage stamp. Sid Vicious, Tupac Shakur—victims of the culture they themselves helped create.

But as the world continues to turn at a faster and faster pace, while everything old is and will be new again, we’ve paid a price for progress. By the turn of the 21st Century, the World Wide Web has all but deleted anticipation from our collective vocabulary. No longer do we suffer the delicious thrill of being made to wait. We are no longer attuned to the pleasures of the chase, or the blissful contemplation of desire. We feed our appetite with immediacy and sate our hunger without thought. The upside: Democratization and a more level playing field. The downside: Lowest common denominator rule; Welcome to the Monkey House.

“We must learn to reawaken and keep ourselves awake, not by mechanical aid, but by an infinite expectation of the dawn,” warned 19th Century poet, essayist and philosopher Henry David Thoreau. But if each day runs headlong into the next in an endlessly streaming on-demand video of instant gratification, at some point soon—when those who remember what came before are gone—will there be no distinction between midnight and dawn? Will style and taste and sexual expression become one universal construct; a giant teat at which the masses suckle and take sustenance? That’s one possibility.

In The Devil’s Dictionary, Ambrose Bierce wrote, “There is nothing new under the sun, but there are lots of old things we don’t know.” Another option? That which has gone out of fashion will for a time lie fallow, and eventually find its way back to the fore.

“Fashion is not something that exists in dresses only. Fashion is in the sky, in the street, fashion has to do with ideas, the way we live, what is happening,” averred the 20th Century’s most influential designer, Coco Chanel, but I’d rather put my money on the sentiments of Muppet creator Jim Henson: “Nobody creates a fad. It just happens. People love going along with the idea of a beautiful pig. It’s like a conspiracy.”

As long as people continue to create and adore beautiful pigs, I believe there is hope for the world.
Tags:
Views: 1085
Related articles