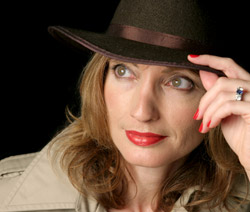 Some would have you believe that sex is the exclusive domain of twentysomethings – or, if you’re being strictly procreative about it, thirtysomethings as well. The swollen, glistening truth of the matter is that you can keep on having great sex for as long as you want to.

There’s no denying that ours is a culture obsessed by youth. From every outlet, media’s seductive siren song proclaims: “Sixty is the new forty!” “Fifty is the new thirty!” If the current trajectory of reverse aging hype holds true, does this mean that by the time we’re seventy, we’ll wind up back in (Heaven, forfend!) junior high school? Hardly.

What all this prolonged proclivity does mean, however (and you twentysomethings may want to leave the room to keep this insidious image from being permanently seared onto your sensitive millennial gray matter), is that men and women of a certain age, namely 50 and up, will continue to bump uglies and party hard and hearty between the sheets—or in the shower, or on the kitchen floor, or even, as one charming British web site cites, “in the potting shed”—with ribald enjoyment and reckless abandon that their youthful counterparts should envy.

While ingenious Mother Nature knew what she was doing when she hot-wired the young with raging hormones and a berserk biological imperative to fuck like bunnies (and there is certainly something to be said for the “Energizer Effect”) the good news for those of us who are getting older—which radically beats the alternative—is that age actually has its advantages when making the beast with two backs.

For in the realm of passion, experts who’ve done the math have concluded that experience and practice routinely trump raw vigor; that for satisfaction, the ecstasies of intimacy outstrip the puerile poundings of mere penetration, and at the end of the day, ingenuity and experimentation are more likely to impart bliss than the staying power of sheer stamina alone.

The concept that well-ripened lovers often make the most satisfying bed partners isn’t a new one. In fact, when founding father Benjamin Franklin wasn’t dangling his key aloft in a thunderstorm looking for a jolt of juice (and if that isn’t a metaphor for kinky sex, I don’t know what is), he was busy extolling the virtues—or lack thereof—of our founding cougars. In a famous and oft-quoted letter written in 1745, Franklin advises a lusty compatriot who is eager to satisfy his carnal appetites outside of marriage, that female fuck buddies, like fine wine and good cheese, are best enjoyed when properly aged.

“In all your amours, you should prefer old women to young ones,” Franklin wrote. Among his reasons for preferring a vintage bottle to Beaujolais Nouveau, he notes (and I’m paraphrasing broadly here) that in addition to artful screwing, older women can actually carry on a conversation; that years of experience have taught them to be more adept and creative lovers; that if you can’t get it up they won’t run out of the room laughing and pointing; that they are less likely to become pregnant; that they could give a bat’s bunghole about their long-since-lapsed chastity; and lastly, that veteran valentines are truly grateful for a great lay. (So, who isn’t?)

Of course, sex in your 50s isn’t a bed of roses that’s always thorn-free. As we age, there are physical, mental and social factors that can detract from sexual enjoyment.

Men in their 50s face numerous medical maladies that can result in erectile dysfunction, or the dreaded “ED.” The good news is that for most, treatment is available to get the old boner back in the saddle. One caveat, though : Little blue wonder pill or no, a man should never ignore the underlying condition that caused Mr. Ed to rear his head in the first place. Now, I’m not a doctor (and, no, I don’t play one on TV, Wilburrrr), but read my lips: Dead men don’t fuck.

For women, there’s the “Big M”—menopause. Once the tick-tock of the biological clock grinds to a halt, certain hormonal changes come into play that can wreak havoc on the female form inciting everything from mad mood swings, insomnia, depression, diminished libido and hot flashes to thinning of the vaginal walls and lack of natural lubrication, which can lessen arousal and increase friction during sex, resulting in soreness and irritation.

Thankfully, the majority of menopause’s nastiest banes can be banished, either via traditional medical intervention, such as Hormone Replacement Therapy (HRT), or through alternative and integrative measures, such as Bio-Identical Hormone Replacement Therapy (BHRT, as wildly espoused by perennial sexpot Suzanne Somers), as well as by means of acupuncture, acupressure, chiropractic therapies, herbal remedies, diet and exercise.

While each individual woman must choose the method of treatment that best suits her sensibilities, experts across the board agree that manmade lubricants—which run the gamut from simple-yet-satisfying products such as Sliquids Organic Silk, to tongue and pussy tingling delights such as the Fizz line—can be essential in greasing the wheels of pleasurable post-menopausal sex.

The news from SAGA (an AARP-like British online magazine), is that 85 percent of sexually active 50-and-ups recently queried reported that although sex is not as frequent, the experience “less pressurized,” at their present age, while 70 percent found a roll in the hay “more fulfilling than when they were younger.” But enough number crunching.

Meanwhile, Back at the Raunch

Baby Boomers, many of whom were at the forefront of the 20th Century’s sexual revolution, were and are more comfortable with sex and sexuality than any generation before them.

Porn icon Nina Hartley, a self-professed “heterosexual butch dyke” who has starred in more than 650 X-rated epics, authored Nina Hartley’s Guide to Total Sex (Avery Press/Penguin, 2006), and can be regularly found cavorting naked for the web cams of Nina (dot com), turns 50 this March. On her Web site, Hartley says: “I came of age during the last time sex was considered to be, overall, more positive than negative. The ’70s were not just about lame politics and stupid clothing fashion, but also about thinking in new ways about sex, gender, culture and empowerment. The idea that women could take control over their own pleasure, and should communicate what they needed to their partners, and that the man was not solely responsible for my sexual happiness, were only a few of the important ideas that came out of that time.”

While this enlightened environment didn’t produce an entire generation of perverts, nymphomaniacs, sybarites, and full-time hedonists, it did empower and unleash a new breed of sexual swashbucklers who are not about to relinquish the role of prurient pioneers and voluptuary trailblazers just because their knees are creaking. “There is always something to learn about oneself through sex,” says Hartley. “By making conscious sexuality my mantra, I always get the most out of every sexual experience, whether giving a friendly hand job in Helsinki or getting it up the butt from (her husband) Ernest.” You go, girl!

Boomer Sex in the Spotlight

For her 50th birthday, actress/author Jamie Lee Curtis appeared bare-breasted on the cover of AARP Magazine. And Madonna? Please! Madge has re-invented her sexual persona so often, you need a scorecard to keep up with the players. (Methinks she may be angling for the “Mae West Lifetime Sex Symbol Achievement Award,” but I digress.)

Sex toys, once “Mommy’s dirty little secret,” have become a multi-billion-dollar industry, and, not surprisingly, one of the industry’s most booming market segments is the “if it feels good, do it” Boomers. Thanks to the laws of supply and demand, the formerly illicit back-alley biz has evolved into a high-class, high-tech, socially-forward landscape distinguished by posh shops, cutting-edge Web sites, and private parties in which once-conservative, middle-aged Southern and Midwestern housewives are buying, selling and demonstrating not how to make a better bundt cake, but what dildo best teases that elusive pleasure spot in a husband’s bunghole. (This one gets my vote.)

“Do not go gentle into that good night,” counseled poet Dylan Thomas. Lovers in their 50s have taken that advice to not only to heart, but to bed and to the bank. This generation, perhaps like no other, has learned to “rage against the dying of the light” by rekindling the fires of lust and redefining the boundaries of passion—again and again…and again.
Tags:
Views: 1728