Googling The One Who Got Away 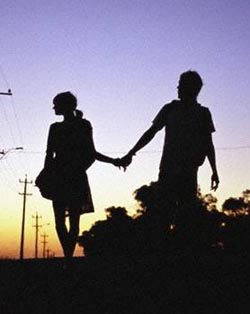 Before Facebook, MySpace, Google, et al, the “one who got away” (OWGA) was rarely more than a passing daydream — or a handy bit of masturbation material.
Sure, someone might have eagerly looked forward to their ten-year high school reunion and they might have spent a little longer picking out an outfit before hitting the mall over the holidays while home visiting parents — but the idea of actually PURSUING an OWGA did not exist. And then people got all connected and starting emailing their OWGAs, flirting over IM, suggesting coffee, sexting, cheating on their spouses, leaving their spouses for a grass-is-greener fantasy ...

The OWGA, in essence, represents regret. Actually, perhaps that’s a little harsh. Rather, the OWGA is the embodiment of “What if?” Dreaming of OWGAs is what happens when someone finds themselves single and/or unhappy (or just a little bored) and starts to rifle through their mental Rolodex. They wonder how their life would have been different if they’d asked out X instead of Y. They wonder, “Maybe I already met my OWGA and was just too stupid to realize it at the time.” They think, “I should have just slept with my OWGA back then and then I’d know what I was or wasn’t missing.” And NOW, thanks to the power of the Internet, they also think, “I wonder if they’re still on the market?”

So is it a good thing that people can now reach out and, er, TOUCH their OWGA? We’re torn. So we decided to create a pros and cons list to help us make up our minds.

On the one hand... it’s kind of awesome when YOU are the OWGA that someone else tracks down. Totally flattering.

But on the other... it does make you think, “Why the hell didn’t they hit on me back then, when I was single and lonely and hating high school?” And the answer is, you weren’t an OWGA back then, that’s why. The urge to merge only really hit them when you transformed, over the years, into a first-class OWGA. Take it as a compliment: we like to think that the truly solid citizens among us all become OWGAs eventually, while the superficial bitchy Heathers of the world fade into obscurity.

On the one hand... if you’ve never quite been able to shake the idea that you married the wrong person, it can be an incredible relief to discover that your OWGA is a total fuck-up/Republican/drunk.

On the one hand... maybe you DID marry the wrong person, and maybe you SHOULD be with your OWGA.

But on the other... what if they’re married? With kids. Way to go, home-wrecker.

Who knows which side wins? And actually, it won’t matter for much longer anyway. Because we are the last generation with the privilege of losing touch with people. The current generation grew up on Facebook. They’ll never lose touch with anyone! So that misguided haircut — not to mention all those ill-advised one-night stands — will stay with them forever. The OWGA is a dying breed, and — call us hopeless romantics — we’ll miss them. Or, at least, the IDEA of them.
Tags:
Views: 1836
Related articles