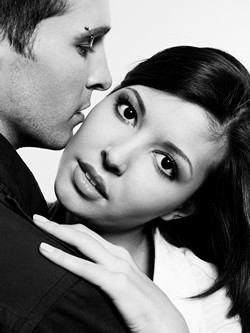 Einstein’s definition of insanity was doing the same thing over and over expecting different results. Applying the same principle to your love life is a proven method to madness.

I have dated a veritable cornucopia of men—with varied coloring and body type—an appetizing array of ethnicities and ages, styles, backgrounds and interests. And they were delicious. Most of them, anyway.

Yet for all their diverse and colorful candy coating, I often found they were a metaphorical bag of M&Ms in that on the inside, they were an awful lot alike. Though sadly not made of chocolate, which would have gone a long way in balancing their less palatable traits.

More than once I found myself sitting across a table from someone thinking, I’m sorry, but didn’t I just break up with you?! Except of course, I hadn’t. I’d simply taken up with a new chap; one in possession of the same charming attributes that had earned the last one his walking papers—or me mine.

So, what was it? What facets within the personalities of these men—so seemingly distinct from one another—kept finding their way back into my life? And why do so many of us, men and women across all demographics, keep falling back into bed with the same delectably wrong partners? Mercifully, members of the medical community are on hand with an easily abbreviated label.

“I call this Error Selection Syndrome,” says Dr. Patti Britton, director and co-founder of clinical sexology training for the Institute for Sexual Health. It’s a condition that often encompasses unresolved issues from the past. “We’re destined to repeat it over and over until we get it right … or so we think.”

Andre, now 47, laughs when he talks about what he calls the “Juggle Fest” of his early dating years, which began after his emancipation from his college sweetheart. “I’d been with one woman for so long, I’d never experienced ‘playing the field’ in any real sense. So, for a while, I stayed out there. I passed on some really wonderful ladies because I was avoiding settling down.”

Gillian, 35, on the other hand, was serially serious. “I hit my 29th birthday and it was a cliché—the marriage thing, the biological clock. On my worst days I was almost panicked about dying alone.” Like Andre, she was chasing off potential love matches left and right. “I’d start talking about commitment and dig my claws in like a rabid badger,” she chuckles.

Eventually, Gillian tamped that down, but another pattern emerged. “Over and over, the men I’d end up dating seriously were just… dicks.” Their behavior manifested itself in all manner of ways, but mostly as jealousy. At the outset, she concedes, it was sort of a turn-on. “It made me feel like the relationship might have a future because he’d seemed way into me.”

Things would persist long after she’d become dissatisfied because, like many, she wasn’t good at breaking up. “The fear of how they might react would keep me there,” she admits.

Gillian’s choices got progressively worse. When her last beau threw a tantrum that culminated in objects flying around her apartment, she knew she needed some help. Therapy wouldn’t bring back the beloved ceramic zebra she’d gotten on her trip to Kenya, but it might save her from the next bad decision.

It was Andre’s best friend who set him on the righteous path. “It was like a spontaneous intervention,” he recalls. “This girl I’d been dating … we were having an argument about another girl I was seeing. James showed up and saw it all go down.” After watching her “yelling and cussing and doing the whole head-tossing ghetto-girl thing,” he says, she stormed out, practically knocking James down as she passed.

“He came in, shaking his head, and said, ‘That girl is a plain, crazy bitch. Your life is turning into the Crazy Bitch Parade, man. My wife hates it when I go out with you, and I have to tell you, I’m starting to agree with her.’

Andre took it to heart.

“I realized it had been ages since I’d gone out with a girl I’d consider introducing to my best friend’s wife. I’m not sure if I was unconsciously choosing women who would put up with my ‘no commitment’ lifestyle, or if the normal ones were just avoiding me like the plague,” he laughs. “But after a couple of years of girls who’d listen to my answering-machine messages when I was in the shower, I started thinking about [my old girlfriend] Denise. Chinese take-out and a movie on the couch were sounding pretty good.”

While Andre, now happily married, broke the cycle on his own, Gillian enlisted the help of a therapist and has been at it for a little more than a year. Her findings thus far? “I’ve been dating my father, apparently,” she laughs.

It’s something practicing sex coach Britton would likely find unremarkable. “Family-of-origin intimacy patterns—such as an emotionally distant or unavailable father—can often feel so familiar that one seeks it out over and over again,” she points out. In Gillian’s case, it was an emotionally abusive one.

“Once I started talking about it, I realized that my mother was similarly held hostage. My dad was jealous of her in many ways. It was a classic example of loving something too much to set it free for fear it would find something better.”

Our Lady of Perpetual Pursuit

Cynthia, 41, on the other hand, is forever chasing the bad girl.

“I’m an oddball,” she says. “The old joke is that lesbians move in together on the second date. I must be half-straight,” she laughs, “or maybe it’s because I’m a femme. All the women I crush on are like commitment-phobic men without the clumsy external attachments. Why do nice girls bore me?”

The common affliction of Bad Boy (or in this case, Girl) Syndrome, says Britton, who has hosted more than 35 couples-enhancement DVDs, is based on what counselors sometimes call the R or “resistance” factor. In fact, one of them even came up with an equation: E=A+P.O.

Cynthia couldn’t agree more. “On the odd occasion I was able to wear one of my conquests down, I’d find they weren’t at all what I thought.”

Britton warns such behavior can be compulsive. “The unavailable [partner] is so attractive because s/he keeps us in the chase. “It takes time [to break toxic patterns],” she says. “Once we cross over into the arena of self-awareness and true self-love—caring first for yourself, then others—we can find the point of choice for healthy patterns. We live from choice. Choice is what sets us free.”

Gillian is still looking for Mr. Right, but that doesn’t mean she’s entirely opposed to “Mr. Right Now.” She admits to “hording one or two highly skilled ‘friends with benefits,’ even if they aren’t ideal candidates for a long-term relationship.”

Her therapist is on the fence about whether the casual, if hot, sex is a smart choice, “but he does admit it seems to keep me even,” she giggles. “Well, that and the Xanax.”
Tags:
Views: 1116
Related articles