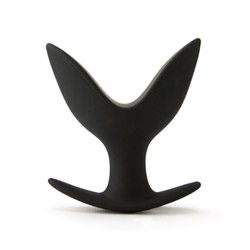 EdenFantasys
Other Spread me reviews

If you are looking for something to wear long term, this could be for you. Definitively no fears of this will be slipping out. Removing it will be fun!

Its texture is a little grainy. That means you may feel a slight drag. Not anything that would make the toy harder to use though.

The two halves that you squeeze in to insert are on the firm side. The neck is softer, and the flared part is very flexible and quite soft.

As you figured, this will require a little more lube that something smoother like glass or stainless steel. The lubricant will make the texture negligible.

As you can see this resembles a toy anchor when standing up. When the two halves are squeezed together, it will look and function like a regular butt plug. It has a flared end to stop it from getting sucked into the rectum.

Once inserted the two halves will spread out and press on the inside of one's rectum. You will fill fuller and pressure on the other side of your anus. 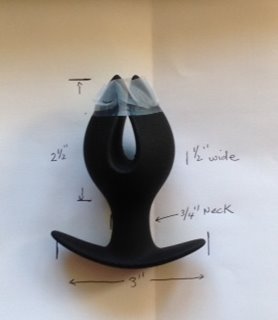 My crude diagram of measurements 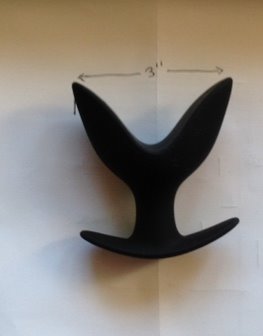 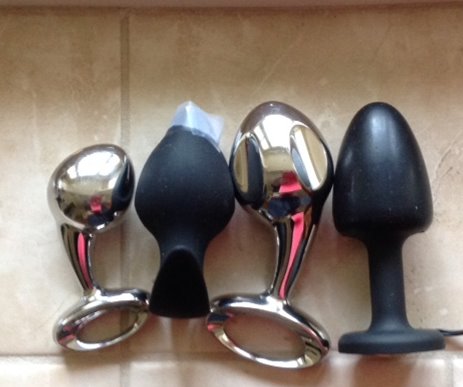 What's the use of having something in your rectum and you can't feel it? Although when compressed it is only 1 1/2" wide it will feel like much more. When your rectum initially "accepts" Spread Me, you will feel pressure. The usual "Wow! What just happened"?

I think this is an "advanced player" toy because it's not easy to get in. The two halves do require some effort to compress. A person without strong hands may have difficulty with this. I think it would be easier if another person compresses it and pushes it in while a subject is bent over.

That said, I was able to get it in by myself. For my first time, it wasn't easy. It took four attempts. I will explain how in the experience section. Once I learned the trick the next time was much easier.

Being made of silicone, it will be a dust magnet. Silicone is easy to care for though. Wash before and after use with antibacterial soap and warm water. It can also be boiled for 4-5 mins for more safety.

As for lubricant only use water-based lube. Never use silicone lube with silicone toys. Coconut oil can also be used.

The Spread Me came in a no thrills, no instruction package. Saves on cost not being boxed with a lot of pictures etc. 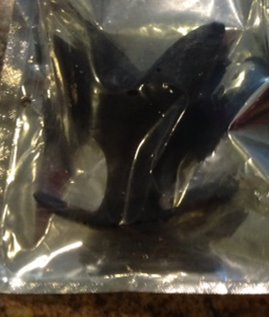 When I placed the order for this, I got thrills of new excitement. The idea of something so large (according to the product page) spreading once inside me was titillating. My favorite plugs are the nJoy large, nJoy 2.0 and large Princess vibrating plug in that order. The thought of having something large spread me was something to look forward to.

When the plug arrived I was surprised. It wasn't that big. I said to myself: "Well maybe better not too big. Too big may be too much of a challenge."

It was very secure in there. No worries of it coming out, that's for sure. Imagine something inside you grabbing your rectum walls. I went about my day being plugged. I felt pressure but not that fullness filling like my other bigger plugs.

However, when I removed it, different story. Felt big then and much pressure. The two halves are quite firm and strong. I could really fill it spreading my anus open upon exiting. Since it was anchored in there, I had to tug to remove it. Afterward, I put a finger in there to check my gap. Sure enough, as expected I was more open than before the session.
This product was provided free of charge to the reviewer. This review is in compliance with the FTC guidelines.

Reviewed by OH&W, Lovebears (Eden Advanced reviewer) Life will go on with or without us. Enjoy it while you can.
Rank
6.1
wrote 102 reviews
Comments
Make a post
Forum
No discussions yet.
Thank you for viewing Spread me – butt plug review page!
Top