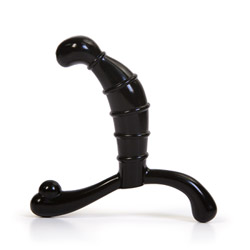 The Contour prostate massager applies strong pressure to the prostate while inserted and is made of a food safe plastic. This toy did not work well with my internal geometry, which resulted in unpleasant pressure and irritation for me during use. It is very similar to a high end p-spot toy I already own in terms of shape and design, and I have similar problems with that toy as well. I think if you benefit from strong prostate pressure then this is a very good buy.
Pros
Good prostate pressure
Cons
Didn't work for my internal geometry
Rating by reviewer:
3
No votes for this review

This toy is best used as a prostate massager, which is what it's sold as and it's shape doesn't really lend itself to other uses. The toy basically is an upside down T shape with the longer end being the inserted end, which would be inserted into the rectum. The toy then has a handle and a perineum massager ends on the based. One nice thing about this toy is the perineum massager end has a small round ball nub that is more pleasant than other inexpensive p-spot toy options I've seen or used.

The toy could easily be used during sex, masturbation on a bed, etc. The handle doesn't extend out as far as some other such toys so potentially you could use this toy while out and about. I found it stayed inserted reasonably easily. The handle is a bit too long to be used while in a seated fashion; however, I'm sure it could potentially be filed down to be less of a problem seated like I did with my Aneros SGX classic. I opted to just roll a towel up create a U shape to sit on with the toy inside the U shape, which gave me enough height that the handle didn't interact with the chair.

The toy is made of a hard black plastic that has almost no flex. The toy claims to be made of a Food-grade material / Hypo-allergenic / Latex-free / Phthalates-free; however, the use of this material on its own resulted in some bowel irritation for me so I would definitely recommend using a condom with this toy. Additionally, it's an 8 on Eden Fantasy's material safety scale and though a reasonably safe material I don't think this material could be fully sterilized so should not be shared between partners or used vaginally.

Outside of some ridges on the inserted part of the toy the plastic is very smooth. The toy does have a seam that splits the toy as you can hopefully see in the picture below:

I'm not sure if this seam plays any part in the irritation I felt while using this toy; however, it's possible that this was a factor.

When I saw the shape of this toy it made me think of the Nexus Vibro prostate massager I already own. As you can see in the picture below that this comparison of shape is really accurate.

I'm not sure what the issue was but the toy seemed to rotate off center when inserted, so the pressure was applied more to the side of the prostate than directly on it. This resulted in a strange feeling vs pleasant one during use. But this is likely due to an internal geometry factor for me that might not be the case for all users.

Similar to the Nexus Vibro, the size of the toy is bigger than some p-spot massager toys; however, it's still not that big compared to others I've used. I likely wouldn't recommend it as a beginner toy, mostly due to the aggressively forward shape as this might turn a beginner off to p-spot massager toy play. The smooth plastic does make inserting this toy very easy.

The toy was reasonably enjoyable to have inserted and is probably in the middle of the pack for all of the prostate massagers I own in terms of comfort. I have a picture of all the other ones I own in my Lelo Hugo review.

The toy fell short for me as I ended up with an irritated bowel during use that resulted in me not wanting to keep it inserted for an extended period. Also as it kept rotating on me while inserted this only exacerbated the potential enjoyment of this toy.

If the toy works well for your internal geometry though I could see this being a very enjoyable prostate massager as it does apply significant pressure to the prostate. This forward pressure design is quite common in quite a few prostate massagers but tends to be a mixed reaction by users of a toy that's this aggressive. Some guys need this aggressive of a pressure for the toy to apply enough pressure to benefit from the p-spot toy and others like myself find this pressure too aggressive and it can also have negative impacts on our enjoyment.

The toy comes in a clear plastic bag, which is all the packaging. You can see this in the picture below: 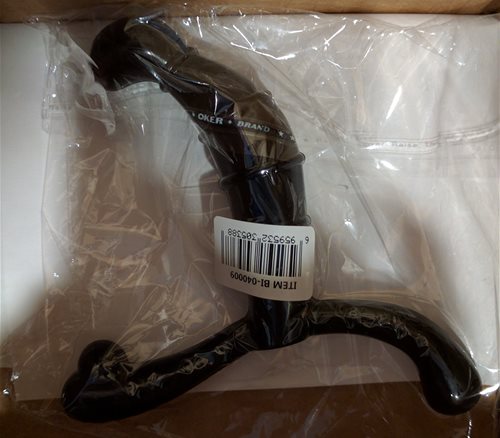 There is no information or instructions included with this toy.