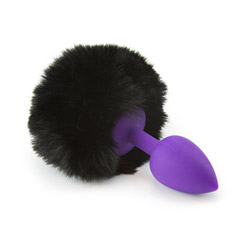 It's so Fluffy, I'm Gonna Die!

This bunny tail combines cute and sexy with an elegant design to create a plug that would make a wonderful addition to any collection. Made from silicone with a soft, fluffy, detachable tail, this toy is easy to clean and safe to use. I was absolutely thrilled to find that this toy and EdenFantasy’s “Back Play Gem” plug have interchangeable attachments, adding versatility to the list of the many qualities this toy has to offer.
Pros:
Easy to clean, Interchangeable attachment, Body-safe material, Super soft
Cons:
Smaller diameter
Rating by reviewer:
5
extremely useful review 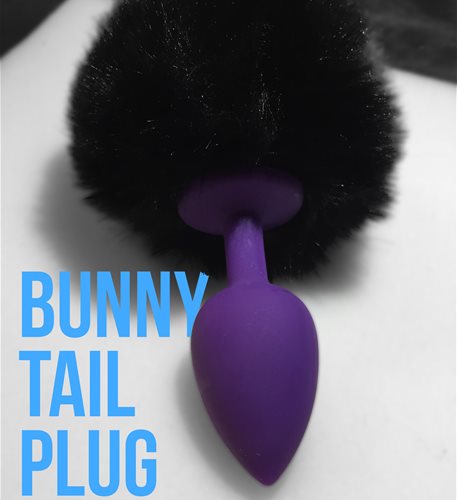 There were numerous layers of protection for this toy, which I found surprising since the plug is very solidly built, without mechanical parts or breakable materials. A velvet, drawstring bag could be seen through the plastic bag when I opened the shipping box. This bag is brown, soft, and can be used to safely store this toy away from prying eyes.

Inside the bag was yet another plastic bag. The plug was inside, wrapped in foam. By this point, I felt as though I were opening a Russian nesting doll with the multitude of layers. The bag is a perfect size to hold the puffy bunny tail. Upon removing the plug from the packaging, the plug was in pristine condition, the tail was not smooshed at all. 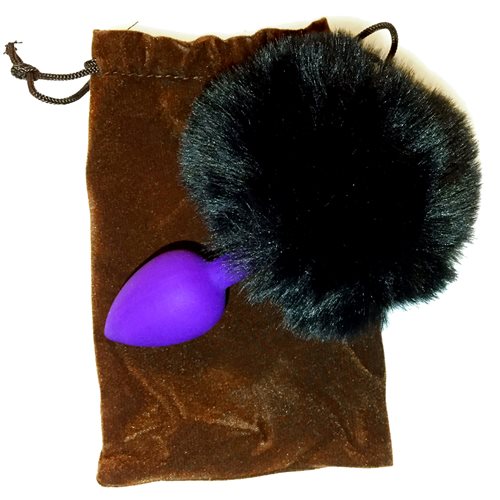 The tail itself is large, approximately 3.5 times larger than the width of the plug. The texture of the tail is extremely soft! Upon seeing the tail for the first time, I assumed it would feel like a pom-pom from the craft store. However, this tail feels luxurious, like a fuzzy, plush blanket or a stuffed animal toy.

The plug is made from silicone. Click this link to learn more about silicone. The color of the plug is a gorgeous royal purple. The head of the plug is firm with the tip tapered to a point, making insertion easier. The stem of the toy is very flexible. 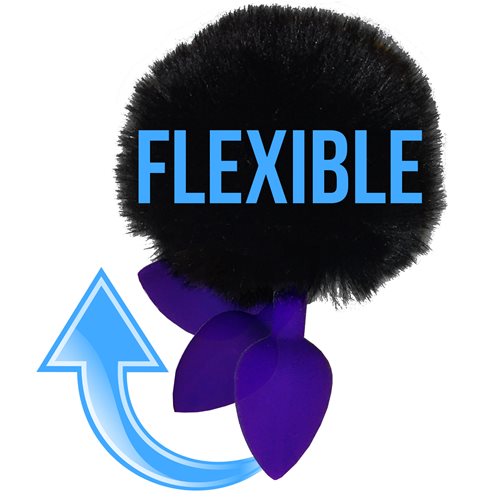 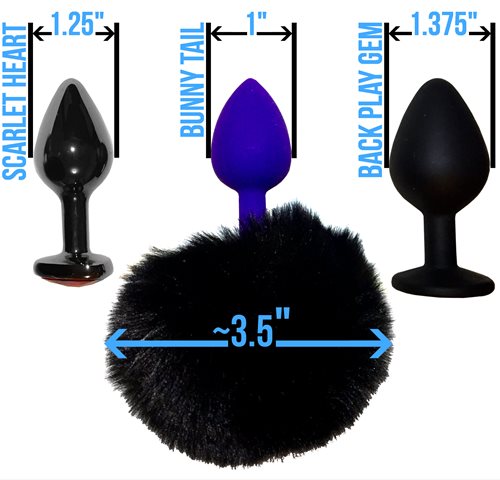 At only 1 inch in diameter at the widest point, the “Bunny Tail Plug” is smaller than any of the other plugs I own. While I don’t typically enjoy plugs that are so small, I found that the tail feature of this plug made it infinitely more exciting.

My favorite feature about this plug is that the tail is interchangeable. I found that the tail portion of the toy can be removed. The tail seems to be attached to a washer and pin fastener. When removed, we can see that the base of the plug has a pocket in which the washer can be seated. The pin pushes into the stem of the plug to further secure the washer in the pocket. 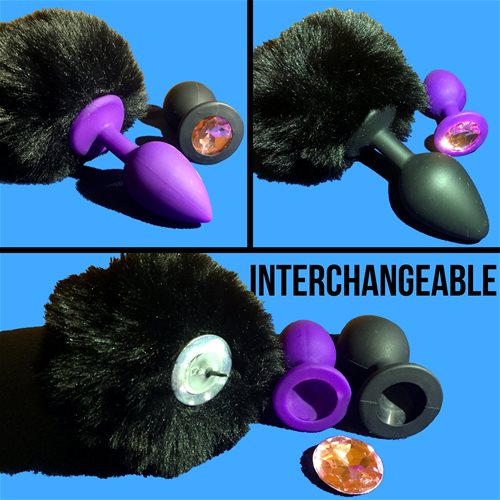 My biggest concern about this toy was how to clean it. Before I realized that the tail was detachable, I thought that I would need to cover the tail portion of the toy to wash the body of the plug without getting the tail wet. 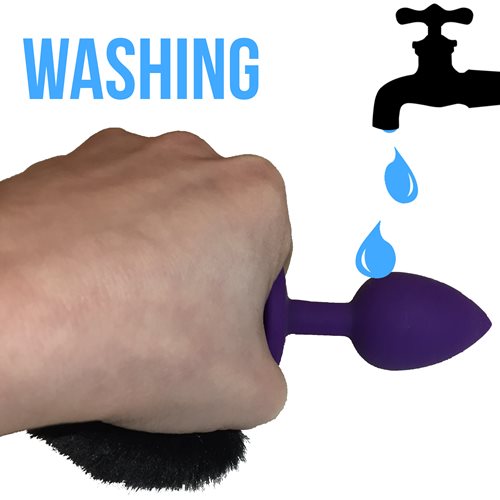 While this is still a valid cleaning option, since the tail is removable, I found that the best option to ensure the tail remains clean and fluffy was to remove the tail. This way, I could clean the silicone body of the plug in the sink while the tail remains clean and dry in the velvet bag. While I prefer soap and water to clean silicone toys, if you feel that your plug needs additional cleaning, once the tail portion is removed, the plug body can be boiled or washed in the dishwasher.
Experience 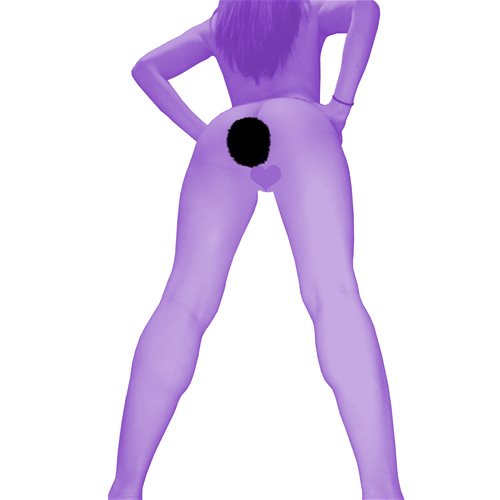 I found this toy incredibly fun to play with. I coated the bulb with water-based lube and slid the tapered tip into my ass. It slid in easily because of the smaller diameter. When the toy was base-deep, I could feel the hairs of the bunny tail on my butt. If you have ever sat naked on a super plush blanket, the sensation of the tail against skin feels similar. I worried that the hairs would be coarse and irritating, however, the tail only aroused me. It felt like I was sitting on a cloud. This toy made me feel like a pampered princess, something that I greatly enjoyed. I found that, if I did not smear lube on the stem, I never got any lube on the tail portion on the toy. 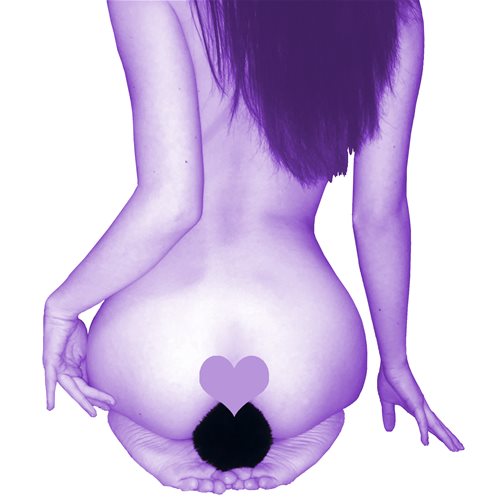 Follow-up commentary   I still like it 3 months after original review
This toy remains one of my favorites! I love the feel of the fur tickling the sensitive nerves around my anus. In a recent play session, I wore the Bunny Tail Plug while my significant other teased my pussy with a Bluetooth toy and I did my deep throat training. All of this sensation made me extremely wet, which dripped into the bushy tail of the plug! At first, I was nervous that the fur would be ruined. However, since the silicone plug could be removed from the tail, I was able to thoroughly clean the plug and gently clean my arousal from the tail. If you have ever cleaned a stuffed animal or artificial fur on a winter coat, the cleaning process for the tail had similar results. Once the fur dried, I couldn't even tell it had ever been dirty. However, I'm guessing that after repeated use, the tail will eventually show signs of wear.
This product was provided free of charge to the reviewer. This review is in compliance with the FTC guidelines.