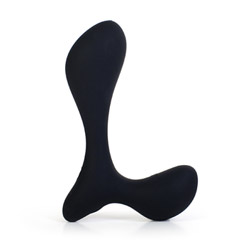 Lux of All Trades, Master of One

The Lux LX-3 is an extremely versatile L-shaped, waterproof, rechargeable, silicone-coated vibrating anal/prostate toy. It can be used as a great butt plug or vibrating prostate massager, an ok standard prostate massager, and is by far the best vibrating butt plug I’ve used. It is comfortable; stays in place; has good power; and can even be used easily in public. The biggest con is the vibe is placed in the premium arm instead of the internal portion and it lacks vibration patterns.
Pros
Versatile, Waterproof, Comfortable, Great packaging, Powerful.
Cons
Vibe placed in perineum arm. No vibration patterns.
Rating by reviewer:
5
extremely useful review

The Lux LX-3 is a versatile waterproof anal/prostate toy that is marketed towards male-bodied individuals. The toy is mainly designed to serve as a vibrating prostate massager but it can also be used as just a vibrating butt plug by both male and female bodies. You can also leave the vibration off and use it as just a butt plug or prostate massager. Lastly, female-bodied individuals could try using use this as a duel stimulation clit/g-spot vibe. 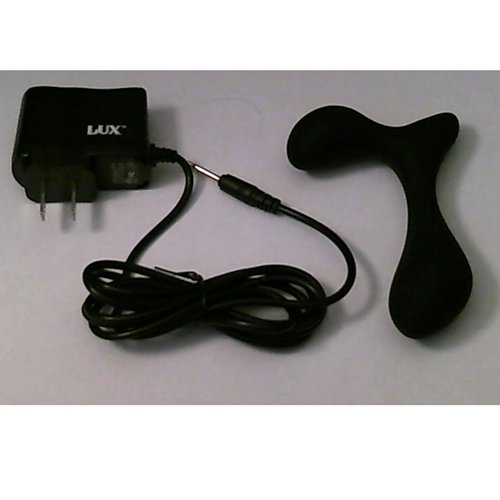 This toy’s exterior is made out of smooth, black, matte finished silicone with an abs plastic interior. Silicone is inert hypoallergenic, nonporous, odorless, tasteless and free of phapahltes or latex. The toy is almost seamless, there is a visible seam along the toy’s length, but it is smoothed out to the point you would have to be really feeling for it with your fingers to notice it. The toy also has various symbols on the top half of the toy around the charging port (the manual apologizes and says they had to put them on to comply with international laws). These are on a part of the toy that won’t be exposed to your body so they are no bother during use and are smoothed out to minimize the visual distraction.

The Lux LX-3 has a relatively rare L shape. The only other toy I’ve seen with a similar shape is the Nobessence Romp. The toy from one end to another is about 4.5 inches long with an insertable portion of about 3.25”. It starts with an oval shaped head that will stimulate the prostate internally and is about 1” on the short axis and 1.25” on the other. From its head, it narrows to its neck that is about half an inch in diameter before expanding to form its base. This asymmetrical base is about 3 inches long from tip to the bottom with the majority being on one end forming a perineum stimulator. It is in this long perineum stimulator side that the toy’s vibrator is housed (a BMS trademarked PowerBullet). The toy weighs about 2 oz.

Operation
You will find the toy’s one button control on the back of the handle portion right where the little nub end begins; run your finger over this area and you will find it easily. This button also has a red indicator light that will light up during operation and remain on for as long as the toy is on.

Before you first use this toy, you will need to let it charge for a full three hours. Secondly, this toy has a lock function and it comes in the locked setting so you will have to unlock it before use. To unlock the toy just press the button three times rapidly, the light will flash letting you know you did it right. If you wish to relock the toy for storage or travel, just rapidly press the button three times again. As with unlocking, the light will flash to let you know it is locked.

Charging
The charging port is located on the top portion of the toy. When you insert the charger in to the port an indicator light right above the port will turn on. When the vibe is fully charged the light will turn off. This toy use a lithium polymer battery unlike other batteries this has no memory effect so you do not need to fully drain the battery before recharging. For best results, charge the battery after use. A full charge gave me 45 minutes of use. The cord on the charger is about 5 feet and the charger has the word Lux written on it. 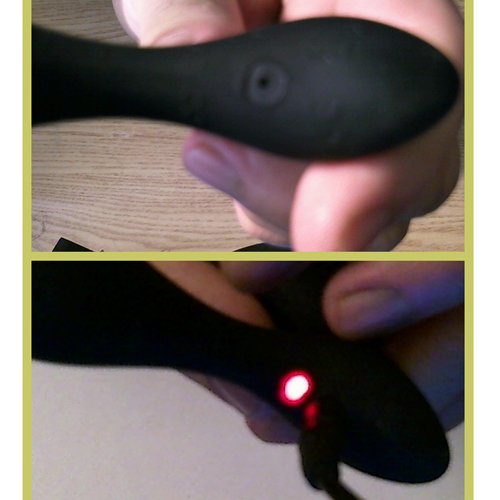 As a Butt plug: As this stayed in in every position I tried: sitting, standing, orgasm, ejaculation, extended wear. Etc, it also makes a great butt plug. The head provides nice prostate pressure and the perineum arm can provide some external stimulation, especially if you wiggle it as you use it. On that note as I’ve mentioned in other reviews, I like wiggling butt plugs to orgasm in places where one normal would not be able to give one’s self an orgasm, walking through your university for example, in this case I took a trip to Burger King with it. This toys design, like that of the Romp, allows it to work well for that application. Also like the Romp, this toy was comfortable for me to sit on however, the small end of the handle sticks out a little bit more here than on the Romp making the Romp more comfortable. The Romp also has an overall better shape and materials making it better as a butt plug, but again like in the example above this holds up well as a competitor. The one area where this did beat the Romp is that it doesn’t slide in the way the Romp does if you are use it backwards, (with the perineum tab facing your back) although I see little reason to use it that way. One problem this shares with the Romp is that the long perineum tab can interfere with double penetration if used by a female-bodied individual depending on how close the opening of the vagina is to the anus.

As a Prostate Massager: In addition to being a vibrating prostate massager the LX3, could work as just a simple hands-free prostate massager. However, it is only mediocre here, while the head does provide good internal stimulation the perineum arm without the vibrations falls a little short. The problem with it is that there is flexibility in the head, this flexibility while making it more as comfortable butt plug makes it less effective at providing firm external perineum stimulation on it own. However speaking of vibration…

As a Vibrating Butt Plug: Simply put this is the best vibrating butt plug I have ever tried. I’ve tried vibrating plugs in the past and all of them have disappointed. Most of them use a bullet in the base of the toy, which results in a neck to head ratio too small for good retention. The Picobong Tano solved this problem but created an even worse one, in the form of the worse seam ever, in the process. The Lux LX3 however worked perfectly, the shape and vibe placement means no retention issues, and since it uses a rechargeable battery, no horrible battery compartment seam is created. Not only that it quite enough that you can turn it on an use it in public, again read my post on my trip rather unique trip to Burger King for information on that. Finally, I have found a vibrating plug I can wholeheartedly endorse!

Other uses: and this is just looking at it from a male-bodied perspective as said the toy could in theory be used like a rabbit vibe. With the internal portion providing G-spot stimulation and the perineum arm clit stimulation. Not having a G-spot and clit, (and unable to perfect my polyjuice potions) I can’t comment on that.

They say “a Jack-of-all-trades is a master in none” however in the case of the Lux-LX3 it more “Jack-of-all-trades, master in one, fantastic at two and mediocre in one”. This makes the LX-3 versatile and although pricy a great value for your money.

To clean the toy, just use some soap and water. Do not subject this to any heat methods of cleaning (i.e. boiling, your dishwasher) as it will melt the internal parts of the toy. If you want a more thorough cleaning, you could careful wipe this with a ten percent bleach solution (make sure to rinse it off before use!). As the toy is waterproof this makes cleaning easy.

Silicone is easy to store, but there are two things to keep in mind. Firstly, some cheap materials may have a reaction with it so keep it away from those and secondly silicone does tend to be a dust and lint magnet. The included packaging is great for storing toy. (see packaging section below). Lastly, only use water based lubes with this toy as silicone lubricates can have a bonding reaction with silicone toys. If you really what to try using a silicone lube do a small test patch on the base of the toy to check for any reactions.

Fitting of its name the Lux LX3 comes in some very luxurious packaging that is excellent for storage or gifting. The sturdy cardboard box is roughly 9” x 5.5” x 2.66” and is very classy. The box has a white and black color scheme with the front just having the Lux logo, which includes the words “Lux male stimulator” and “silicone” on it. The back has some words about the toy as well as all the expected legal stuff. When you first receive the toy it will come wrapped in plastic, as well as having an elegant gold seal with the LX number of the toy placed vertically on one side, you will need to break or remove this seal to open the box.

When you first open the top of the box, you will notice a larger version of the logo that is on the front of the lid, on the button you will see a pamphlet listing the entire toy Lux line as well as this toy’s user manual. Under that, the toy and its changer will be nestled in dense black Styrofoam. The lid includes magnets to help keep it closed when you lower it. 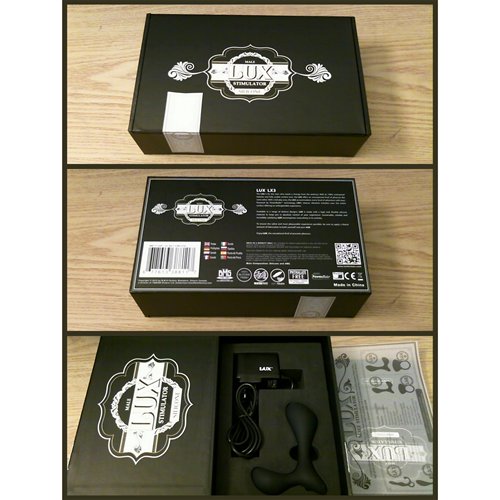 The included manual comes with instructions (in English, France, German, Spanish, and Polish) on use, cleaning and the basic of prostate massage. If you or the person you are buying it for is new to prostate massage or prostate toys the manual is clear and helpful.

As I mentioned above you can read my post about using this in public at my blog, it includes some notes on specifically using it for this purpose.
This product was provided at a discounted price in exchange for an unbiased review. This review is in compliance with the FTC guidelines.