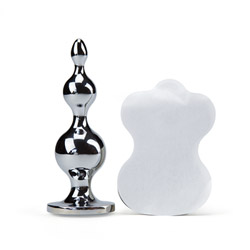 This is a nice little starter setup for e-stim play. The plug isn't oversized and should easily fit into most beginners, no matter the hole you slip it into. The sticky pad isn't the best, but a little tape works wonders in keeping it where you want the electricity most.
Pros:
*Solid Design
Cons:
*Sticky Pad isn't that great
Rating by reviewer:
3
extremely useful review

To use this you need a control pack, which is sold separately. You have to rub some water-based lubricant on the toy and insert it after you attach it to the wires connecting to the control pack. There is a nub at the base for the wire to snap onto.

The toy acts more like a plug than anything else. So all you really have to do is slide it in and keep it in place.

The plug is made out of steel, to better conduct the electricity from the batteries. It is a solid piece and rather weighty. The large ball near the base is more for keeping it in place, as the toy really doesn't work as a thrusting item.

The design for the plug itself is okay. It stays inside with little effort. The little sticky pad that is included is another story. You have to be careful with it, as it doesn't want to stay in place and can attract dirt or hair very easily if it comes into contact with the floor.

The steel plug is easy to clean. Boiling water works well with it. And could also lead to some temperature play situations when subjected to heat or cold. The sticky pad is harder to care for, and may need more in the way of replacements, the more frequent you use the toy.

This was my first venture into e-stim play. It was alright, though it took some getting used to. As I said before, the pad did not want to stick to my skin so it became more difficult than it should have for solo play.

One recommendation is to turn the control box used to the very lowest setting, and slowly increase it. You might not think it, but a pair of AAA batteries can bite you very strongly at higher levels. So if you are a beginner like me, do as I did: add the intensity slowly, bringing it to a comfortable level.
This product was provided free of charge to the reviewer. This review is in compliance with the FTC guidelines.