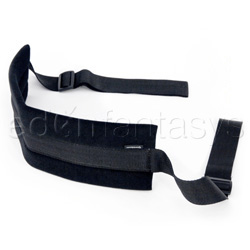 Who knew that something this simple could be so much fun?...it adds a new dimension to an old position, and can be used in other, creative ways as well.
Rating by reviewer:
4
useful review
Who knew that something this simple could be so much fun? I Like it Doggie Style restraint looks unassuming, but it really adds a lot to certain sexual positions. The padding section is very soft, which was important to me. When my husband put it around my tummy and then assumed the position, it felt soft, and it didn't leave any marks on me when we were done. Hubby liked that the handles are adjustable, allowing him to have them shorter or longer, depending on how much control he wanted, and how close to me he wanted to be.

When used "I like it doggie style", it really added a feeling of support and control when he pulled back on it. He loved it because it held me in place, allowing for deeper penetration. Hubby loved the added feeling of control that it provided him, I personally liked the support.

We also used it when we had sex in the spooning position and that was great too! Again, less movement meant deeper penetration and greater contact. While we were spooning, I bent at the waist with the restraint around my tummy. When he pulled back on the straps, it pulled my ass closer to him and also held me in a firmer position for his thrusts. He said he pulled more 'up' than 'back', and he felt that he could pull harder in this position than he could in doggie style.

This restraint is tough; I am not a small woman and it held up just fine for us. In longer sessions, it can tire the man's arms out. But overall, it adds a new dimension to an old position, and can be used in other, creative ways as well. It is waterproof, so I think we will take it into the shower with us next time. Fun stuff!
This product was provided free of charge to the reviewer. This review is in compliance with the FTC guidelines.

Reviewed by Destri (Eden Writer) The only queer people are those who don't love anyone
Rank
5.7
wrote 84 reviews
Comments
Make a post
Forum
Thank you for viewing I like it doggie style – sex toy review page!
Top