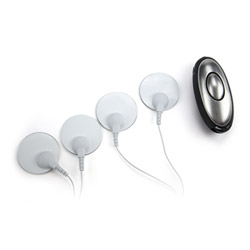 E-stim with gel pads
by EdenFantasys

It's Electric, but Barely

The most important thing to know about the Elektra is that it provides extremely gentle sensations. For those already comfortable with electro-play, look for another TENS unit. If you are a beginner, you should understand that this toy does not give strong enough sensations to approximate even the weaker settings on any other TENS unit I've tried. If you are someone extremely sensitive to electric sensations, you may enjoy this toy.
Pros
Attractive design
One cord with four pads included
Cons
Weak
Lack of worthwhile functions
Rating by reviewer:
3
extremely useful review

I'm going to break this toy down into several constituent parts, because I think that some parts are better than others. There is the TENS unit itself, the cable, the pads, and even a little wrist strap to keep you from losing the tens unit. 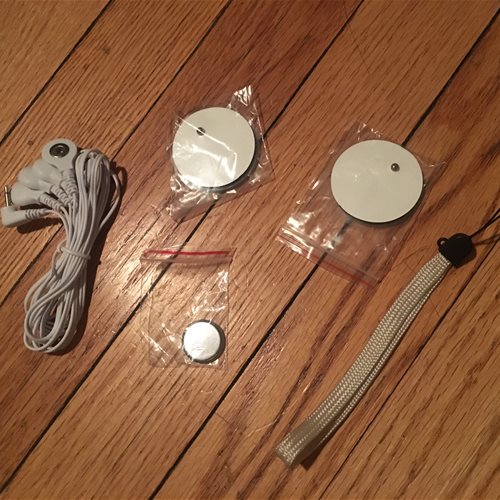 Now the TENS unit itself is best used for demonstrating to a trepidatious partner that electrosex need not be scary or painful. If you are looking for a low-power tens unit virtually incapable of delivering a strong enough current to be painful, you've found it. If you're looking for something to deliver a current any more than "barely noticeable", you're probably barking up the wrong tree.

Electro stim units, generally, are great just for alleviating back and muscle pain, and provide a feeling like a very deep, powerful vibration. It can be used on or around the genitals, on the labia, buttocks or near the anus. The contractions it causes can simulate the feeling of orgasm. Not having a vagina, I can't personally speak to its efficacy in producing a vaginal orgasm, but if you can achieve a prostate orgasm, this is a good way to coach your body into it. Producers of prostate toys like the aneros recommend that the user repeatedly contract the sphincter muscles to massage the prostate until orgasm. A TENS unit used with a plug and placed properly, can basically cause the sphincter to contract in the same way, without the user having to do any of the work.

This is, of course, assuming a TENS unit that deliver sufficient power. Unfortunately, at least in my case, the Elektra did not.

The interesting thing about the Elektra is that it has two different modes: one in which the electric pulse is sent through the TENS unit itself, another in which it is sent out through a cord. The cord included with the Elektra has 4 pads on it (in contrast to the ePlay basic Set which only sports two). These pads are about half the size of those that come with the ePlay, and round, whereas the pads included with the ePlay basic Set are sort of hourglass shaped.

The pads are exceptionally sticky, so you need to be careful near dust and hair or you'll end up picking it up and have a fun time cleaning it off. In order to work properly, you'll want/need to use some water based lubricant on each of the pads before attaching them to your body.

The shape and size of the unit is extremely convenient and very inconspicuous. Nothing about the electra screams "sex toy", as it looks more like a remote than a vibrator. There are different controls on three sides of the unit (see picture): one to control the speed (more accurately, the intervals between) electric pulses; one to control whether the electronic pulses are delivered through the TENS unit itself or through the cable attached to it; and a dial at the bottom to control the intensity. There is one slot in which to plug in a cord to pads or a probe, in contrast to the ePlay unit which has two outputs. This limits the ways in which the unit can be used, but because the included cord splits off into 4 pads (the one included with the ePlay Basic Set unit includes only two), this isn't as much of a drawback as it might be.

The dial can be a bit hard to move, which would be a good thing if the unit was capable of delivering enough power to accidentally deliver a rough shock. However, it can be a little annoying if you're having a hard time getting your hands completely dry. You'll want to make sure you do before turning the dial, as the combination of slippery hands and difficulty moving the dial cause you to accidentally move it too much and too fast. That said, the Elekra is so gentle even on its highest setting that I am not sure it can deliver an unpleasant shock, even if one did slip and move the dial all the way up without warning.

Also, the Elektra has two settings: fast, and slow. What it lacks is a "constant". I have used a TENS for physical therapy, and in those cases, the current was delivered at a constant rate rather than switching on and off. The sensation produced by both the "fast" and the "slow" settings is more like a repeated tapping sensation than a massage or a vibration. 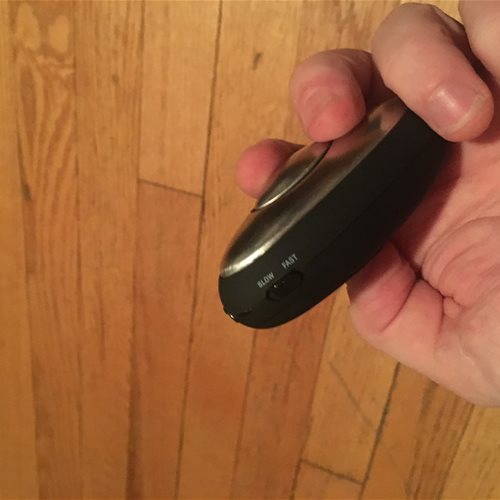 I personally find the tapping sort of jarring and unpleasant. This, combined with the weakness of the sensation, make it more of an annoyance than anything else.

This was an annoying part of the ePlay unit as well. However, the ePlay has a massage setting and a vibrate setting, which deliver more prolonged (albeit intermittent) pulses. I find this much more pleasant and useful, both for general pain relief and for sex play. I don't like that there is no mode in which the current is delivered at a constant pace, but the vibrate and massage modes are substantially more pleasant than the Elektra's slow and fast modes. Moreover, the power of the ePlay is far more variable, and it is capable of much more intense sensations than the Elektra. Of the two, the ePlay is the clear winner.

As for the vibrations delivered by the TENS unit itself (rather than via the cord), I simply don't get the purpose or the appeal. You can switch to this mode by flipping the switch on the side of the unit to "in" It works fairly well as a gag if you want to surprise somebody with a shock, but as for delivering pleasurable sensation play, or even in a bondage setting, it doesn't seem strong or ergonomic enough to be useful. I would be very cautious about inserting it into any orifices, as it would be impossible to reach the controls at that point, and could be very difficult to retrieve, as the electric current causes muscles to involuntarily contract. 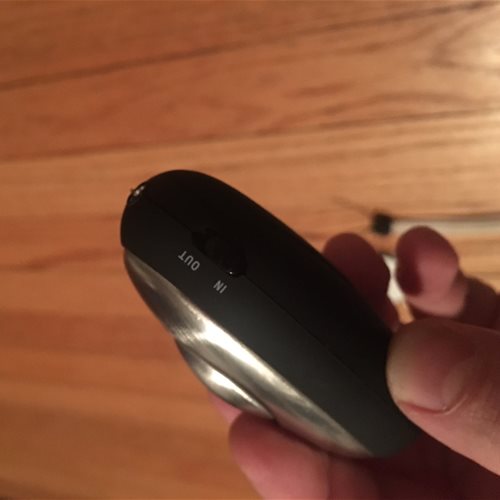 Water-based lube is essential as a conductor. I have not tried using a silicone based lube, but as a general rule, I avoid this with any sort of toys. The sticky pads can be a bit of a pain to clean, as one does not want to remove the sticky property of the pads, but hair and dust gets stuck to the pads quite easily. I highly recommend keeping the pieces of plastic stuck to the pads and replacing them when done using the unit, and placing them inside of a plastic bag for storage.

The packaging for the Elektra was quite nice. The TENS unit itself is displayed in the front. 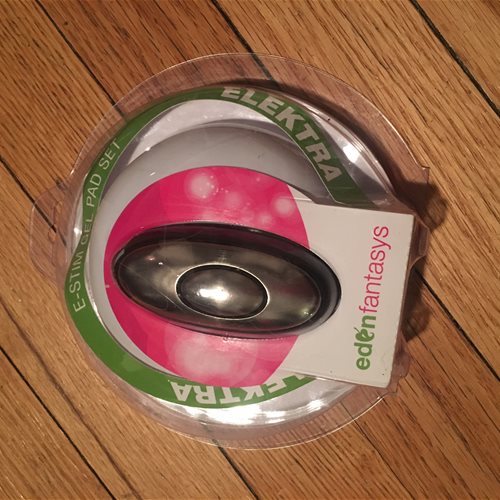 The cables and other accessories are stored in a compartment in the back of the package. 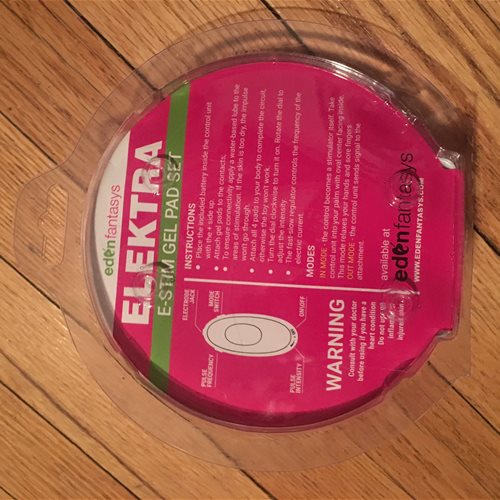 If one were so inclined, one could keep the package and use it for storage. Although the package might be a little bigger than necessary for storage, it is a convenient, readily available, and resealable way of storing the unit.

ePlay basic set
$12.49
This product was provided free of charge to the reviewer. This review is in compliance with the FTC guidelines.

Reviewed by That Guy (Eden Advanced reviewer) What does all play and no work make me?
Rank
5.5
wrote 20 reviews
Comments
Make a post
Forum
No discussions yet.
Thank you for viewing Elektra – e-stim with gel pads review page!
Top