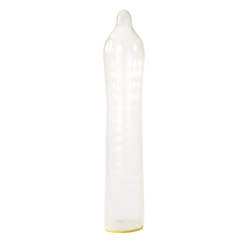 Durex Extra Sensitive Lubricated Condom is very thin and natural feeling. So comfortable for her that it is hardly noticeable, yet it can be a bit tight and restrictive for him. An excellent condom for the price.
Pros
Very thin and natural feeling
Cons
Latex scent, slightly restrictive and tight for him
Rating by reviewer:
3
somewhat useful review
Being married, I rarely have the need to use condoms, other than as a back up to new birth control. Previously while dating, my husband and I always had difficulty finding condoms that we liked. They always seemed too thick, too rubbery or not just comfortable. We decided this time we wanted to try the thinnest one we could find hoping we would have a better experience than in the past. Durex extra sensitive lubricated condoms are the ones we chose to try.

My husband was not nearly as impressed. He felt the condoms were restrictive and tight, especially around the base of the penis. It seemed as though this tightness also delayed ejaculation, which in turn contributed to the marathon sex sessions that caused the condoms to get uncomfortable for me. I would say my husband is of average size, probably about 6 inches and a bit girthy, so these condoms may not be suitable for a man much larger than that or with much girth.

The Durex Extra Sensitive condom is described as having a very low latex scent. I still found the scent fairly strong and easily noticeable. The scent also stayed on me after having sex until I was able to shower. Nothing got rid of the scent other than lots of soap and water in the shower. Baby wipes, wash clothes, nothing else worked. Although we did not use the condom during oral sex, I would think the latex scent would make oral sex unpleasant.

Overall, I think these are some of the better condoms I have used. They have similar drawbacks to most other condom on the market. They are also easy to find and relatively inexpensive. If we have the need for condoms again in the future, we will probably try these again.
This content is the opinion of the submitting contributor and is not endorsed by EdenFantasys.com