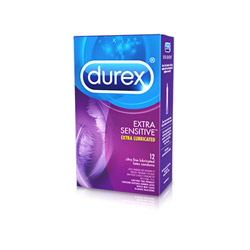 My previous condom of choice

Condoms are like one of those things no one really enjoys but are necessary; however, if you have to wear a condom having a solidly built condom that doesn't take away too much from the experience is crucial. These were my favorite condoms until Durex released a newer line of ultra-thin condoms. The do a great job of not taking away from sex too much but providing quality protection during sex.
Pros:
Ultra-thin/more sensations during sex
Can feel heat through them
Well built
Cons:
None (aside from being a condom)
Rating by reviewer:
5
No votes for this review
So I rarely use condoms once I'm in an established long term relationship unless my partner gets sick and can't take their birth control pills (happened with my current girlfriend). My ex-girlfriend ended up getting an IUD so she didn't have to mess with pills or rings. Anyway, that aside my penis is not very sensitive so ultra thin or ultra sensitive condoms are a must for me to feel anything while using them. The Durex Extra Sensitive condoms were like a god send when I first discovered them with my ex-girlfriend. These were the second ultra-thin condom I tried after trying the Trojan Ultra Thin and after trying these I never bought the Trojans again if these were available.

Like the Trojan condoms, these condoms have a minimal smell, which isn't very noticeable. They don't seem to have any real taste to them or least none that my ex made comments of as she would sometimes re-lubricate the condom with oral for longer play sessions.

I had the same feelings in terms of quality of construction for these condoms as I did for the Trojan ones. The condoms are well built and never had issues with any of them being defective in the packaging or breaking while applying the condom. Also, properly applied never had issues with any of them breaking during use. I always stored them in the box at room temperature with no extremes to insure that the material didn't suffer any fatigue that could lead to it breaking.

So the thinness of these condoms like that of the Trojan in that it allows you to feel more of the sexual experience with your partner as there is less material keeping you apart. This meant I could feel muscle flexes of my ex-girlfriend when she flexed her kegels while inside her. I couldn't feel these with regular condoms. This also meant that when she came to having an orgasm I could feel her muscles spasm while inside her, which would bring me to orgasm usually too. What really differentiated these from the Trojans was that I could actually feel body heat through the condom, which really enhances the experience and increases the connection I had with my partner while using as she could also feel the heat of my penis through the condom too. It's not as good as sex without a condom, but this is really close so if you need the projection makes this condom a great choice.

My current favorite are the newer Durex Invisible condoms as they are even less noticeable, but these are really good condoms.
This content is the opinion of the submitting contributor and is not endorsed by EdenFantasys.com