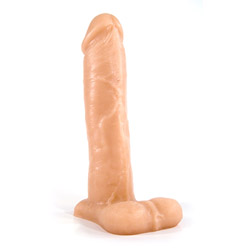 Overall I would suggest the Outlaw because I feel it is a safe sex toy and it feels very authentic. I only give four out of five possible stars because it could look a bit more realistic (especially the balls) and could use a bit more girth (since it is the biggest dildo in Vixen's collection I can also not get a bigger one right now unfortunately).
Pros:
safe and phthalates-free
100% silicone
feels very authentic and real
easy to clean
Cons:
could be a little bigger (for size queens like me)
could look a bit more realistic
Rating by reviewer:
4
somewhat useful review
This is a review from a gay men who uses it anally.

Easy to clean.
I like the fact that (as I have already said) this toy is safe and can be cleaned very easily. If you want to you can even boil it in hot water to disinfect it.

Water-based lubes only
Since this is made of silicone it must not be used with silicone based lubes. So far I had been a huge fan of silicone based lubes since they don't dry out. However, water-based lubes have obviously been dramatically improved because I ordered two of them and they are both fantastic. One of them is called Flutschi (which is a German brand, so most of you will probably not be able to get this in your country).
This content is the opinion of the submitting contributor and is not endorsed by EdenFantasys.com