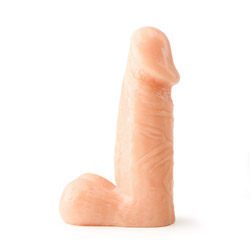 All in all, I would say there's a relatively limited demographic for this toy but for those who are interested in it, it's a decent toy.
Pros:
Girthy enough for a fuller feeling.
Cons:
Small, not squishy, not bendy
Rating by reviewer:
3
No votes for this review
It's not bad, honestly. It's a little less bendable or "squishable" than I'd prefer and it is, as its name suggests, very small but it's just girthy enough to give you a much fuller feeling than you'd expect. It hasn't worked well for me as a strap-on because I'm chubby (A suction cup or some sort of base would have made this toy much better in my opinion. With just a little more length would have made this usable with a harness), but for self-play, it does the job okay. This would also be good for beginners or anal warm-up. Although to be clear, the head has a fairly large, defined ridge and is definitely noticeable so for any first timers or small holed individual, be aware.

The veins and texture are pretty good. They're definitely noticeable during penetration which makes this particularly good for those individuals who get off more on what the toy feels like as it's going in rather than what it feels like when it's fully inside.

It is definitely a little tacky feeling, so plenty of lube (store-bought or natural) is a good plan.

It doesn't have a particular taste or smell which is great as far as I'm concerned. I've had a couple of experiences with toys of lesser quality or materials that have strong odors and flavors when they're not supposed to, and that's super unpleasant.

It's really easy to clean and care for. Mild soap and warm water or a toy cleaner will do the job nicely since it's PVC. It's a safe material too. Latex-free, phthalates free and non-porous.

The packaging was really basic, which doesn't bother me any. Just a simple cardboard box with air packers and the toy itself was in a plastic case that was fitted to the toy. Very discreet packaging which was definitely a plus when I received this and was living with roommates.
Experience
As an addendum, I've worn this inside me while using a strap-on (I use a brief boxer harness that fit very snugly) and that was a good experience, so there's an option.
This product was provided free of charge to the reviewer. This review is in compliance with the FTC guidelines.

My Mini realistic tags
About author