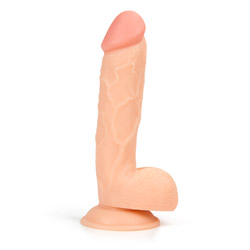 Filled to the max

This is a large toy, both long and thick. If size is what you desire then you've found it. This dildo can be used in a variety of ways including handheld, strap-on, or suctioned to a surface. It does have a slight odor that has not gone away yet (4 weeks) but it is not overwhelming.
Pros:
Realistic feeling and texture, strong suction
Cons:
May be too large, slight odor
Rating by reviewer:
4
useful review
The first thing I noticed when this package arrived in the mail was the weight. It is a heavier toy (listed as one pound) which means it can be a tiring toy to use if you are holding it the whole time. The toy was designed with a suction cup however, so the weight should not become an issue if it is used in that matter. The packaging for the toy was very plain, consisting of clear plastic packaging with a paper insert with the product name on it. Part of the packaging is shaped like the toy so if it is packed in a padded envelope instead of a box someone could potentially feel the shape of the contents and figure out what is inside.

The suction provided with the suction cup seems to be more than adequate whether used on a vertical or horizontal surface. Placing it on the wall and pulling on it to test the suction required a good amount of force to actually remove it. However, when it was pulled at an angle or pushed down on, it did come off much easier. When it did come off it left a circular mark where it was. I was able to wash it off but it took some time. Perhaps washing the toy first would solve this issue but I can't be sure.

The dildo is made with a firm material (Phthalate Free PVC), but does give slightly when squeezed which makes it feel like an erect penis. It also features a veined texture that adds to the realism. The head and upper part of the toy are the thickest parts (aside from the balls near the base). It is nine inches tall (6.5 inches insertable) and it shows. Everything about this toy is big, so if you are looking for size you've found it. It is a very easy toy to clean using soap and water or a toy cleaner.
This product was provided free of charge to the reviewer. This review is in compliance with the FTC guidelines.

My Mr. Eight tags
About author