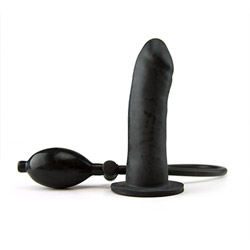 When the dildo is entirely deflated, the toy boasts a standard 5" in circumference. This is about the size of your "standard" biological human penis. With a bit of lubricant, anyone that can comfortably take a standard biological penis shouldn't have problems with this one. However, once the toy is inflated, it reaches a thicker diameter, and at that diameter, it likely won't be as comfortable for penetration for most people. To experience the best of both worlds, it's recommended to insert the toy while entirely deflated and try the inflation, slowly, while the toy is already inserted. This will allow for a gentle and gradual stretch that can slowly be increased over time if desired.