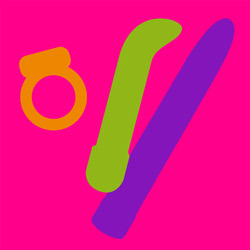 You never know what you might get and that's what makes this mystery gift awesome. You have so much anticipation and then you may actually get something that at any other time you may not could have afford.
Pros:
Get a feeling of excitement and wonder.
Free over $59
Cons:
None
Rating by reviewer:
5
useful review
I was a little skeptical about the mystery gift but since I had over sixty dollars worth of stuff I could get it free. So I went for it. I was expecting to get a little finger bunny like most over people had received. However, that was not the case. I had actually received a "Big Boy" Massive 12 inch. Which from my research usually runs about $40.

This toy is made by the Doc Johnson company and is made out of PVC. I was very pleasantly surprised but what I have received and will defiantly be using it in the future. After this experience if I had to do it over I would defiantly do it even if I had to pay the $20 just to get it.

The toy itself is very big. It is 12inches long, about 7inches around, and the base is a little over 2inches long. There is about 10inches that is actually insertable. (not that I would actually get that much inside.) I was very happy and amazed that it was not just a cheap piece of crap. (which I had figured it would have been.) Just goes to show you can always be surprised. You never no what you might get with a mystery gift and when it's free you really have nothing to loose.

As for whether or not they go by your material preference, I have no I do because I have none. If you do you might want to bring up the chat and ask before ordering.

All in all I was very pleased and hope they keep this promotion going for awhile because I would defiantly love to order another one in the near future. If you are skeptic about it just take a shot at it especially if you can get it for free when ordering over $59.
Follow-up commentary   I still like it 3 months after original review
I still love the toy I received the first time (BIG BOY). The second (some little bunny thing) was not so great. It has good power to it but is very loud and when I put it away it just started randomly turning itself on. I finally just took the batteries out of it and pushed it to the back of my toy drawer. I do still wish they had this promotion though because I did like the excitement of not knowing what I was going to get.
This content is the opinion of the submitting contributor and is not endorsed by EdenFantasys.com