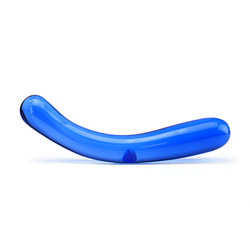 I bought this product on EdenFantasys with a promotion for 3 products for 30$, so I couldn't let it go!

I washed it with soap and water and used a little hydrogen peroxide; the cool thing is that it is glass, so you can put everything on it! I suggest anyway to use a little lube. It didn't feel cold when I first inserted it, but I had just washed it with hot water, so that might be the reason! It gives a silky smooth sensation, that's a really pleasant approach.

I love the design, and I love the color. Maybe it's a little thin for an average/strong user. It is great for beginners though. It's very simple; I'd probably would have made the G-spot stimulating part a little bigger.

Best thing is the design; it looks awesome. The texture is definitely another pro of this toy. In my opinion, it has nothing wrong for a beginner user, for an average one, it is maybe too basic.

Really easy to take care of. As it is glass made you can use everything to clean it or lube it. Soap and water are the easiest way to clean it unless you want to use something which is antibacterial too.

Mmmm, this is a con...there was no packaging at all except for the purse which looks cheap, but it does its work at least offering a discreet way to store it.

I think I've said everything. What I'd like to remark is that I'm convinced that this is a great toy for beginners, but with a bigger G-spot end!
This content is the opinion of the submitting contributor and is not endorsed by EdenFantasys.com