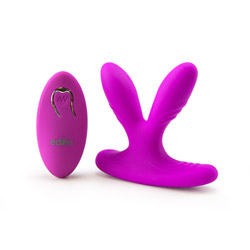 A Vibe for Beginners or Couples

A decent starter toy that's beginner friendly; easy to clean, use, and store. It's small so it will travel nicely or store quickly. It's got a moderate strength of vibration intensity that's perfect for all Goldilocks shoppers. The remote and vibe are wireless and chargeable, which is a perfect addition to any couple play.
Pros:
*Hygienic and easy to clean
*Small in size
*Multiple Patterns of vibration
Cons:
*Moderate strength at best
*Awkward handling
Rating by reviewer:
4
extremely useful review

I'll start by saying I was not at all impressed with the packaging and how this was shipped to me. I'm amazed that my toy survived in a crushed box with absolutely no protective anything inside. Did it get damaged in shipment, or was this toy already not powerful? I'll never know. 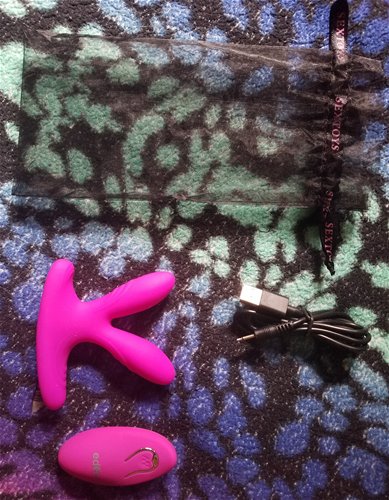 The toy, remote, and charging cable arrive in a small mesh black bag. This is a wireless set up and your vibe will require time to charge before play.

The material is silicone, making this a very soft to the touch toy. There's some gentle ridges along the base of the toy but I didn't much notice them during play so I don't know if they're meant to enhance the experience or are just for decoration. 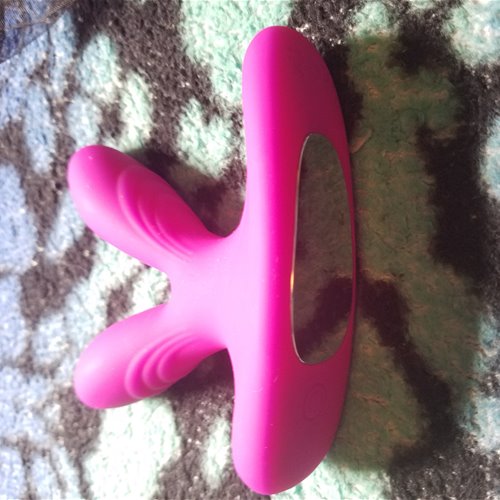 The features of the toy (which I'll explain in depth below) made me feel like this was perfect for couples who enjoy surprising each other, or beginners. I think beginners would enjoy it because it's easy to operate and isn't overwhelming in size or strength of vibrations. Couples will enjoy it because of the wireless system and the multi-function design. 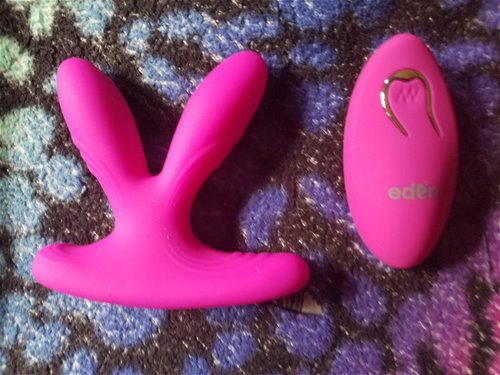 This vibe unfortunately didn't come with any literature about it, so I am not able to say how many features exactly it has and what they all do. I can say I pressed that button until I noticed I was repeating them. I would guess at around 10 patterns; they range between a steady vibration of leveling strengths, different pulses, and escalating patterns. I'd say there's 3 levels of a steady vibe, some sort of a heartbeat/ zig-zag patterns, and a sort of 'woooomp woooooooooomp womp' that gets stronger then cuts off only to repeat. 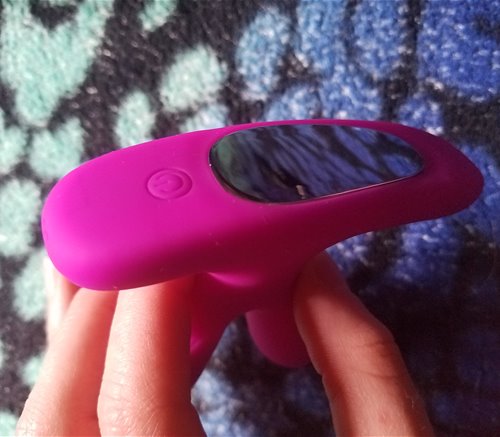 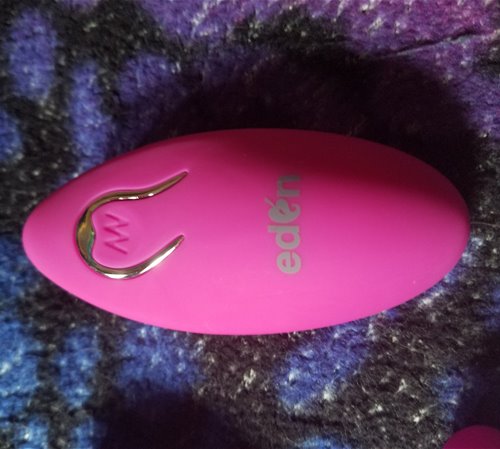 The power button is located on the base of the toy, it's clearly marked but does take a hearty press to turn it on. Press and hold slightly to turn it off, or press and hold the button on the remote. You'll need to turn each on independently, I recommend starting with the vibe. I tried to turn on the mote first and it took a minute to get them to sync up.

During play I quickly came to the conclusion that this was not going to be the toy for me. I found the pattern timing to be a bit off and they didn't have a lot of strength to them. Whereas, the steady vibe feature did have strength, but each shaft fell at an awkward length. It just kinda vibrated the flesh itself versus any single part, and for me that felt pretty weird.

Having to hold the vibe and remote separately made things a little clumsy and awkward as well. The button is higher up on the remote and I had to hold the vibe with my other hand. More than once I had to drop half to readjust the other. That being said this is probably a great toy for couple play. 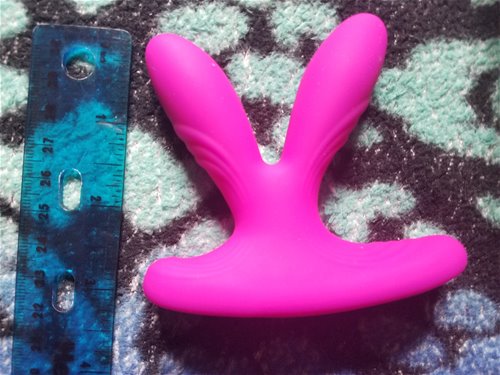 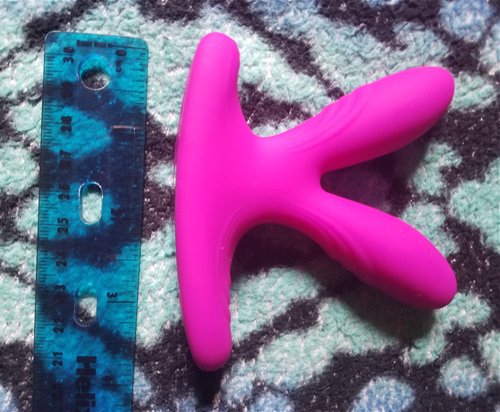 Charging and cleaning are probably the two easiest things to do with this toy! 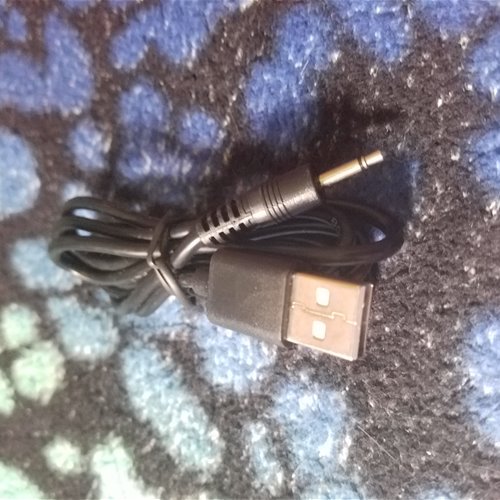 *Charging*
The charging is quite simple. Just plug in the cable to the port in the photo below, then plug it into your computer or portable power bank. DO NOT use a wall adapter and plug it into a wall. The power exchange is often too high and it tends to create problems with the battery or burn it out entirely (this happened to me once and it was awful). You'll know it's charging when the red light comes on, and likewise it will turn off when complete. It took approximately one to one and a half hours to charge completely on my desktop computer. 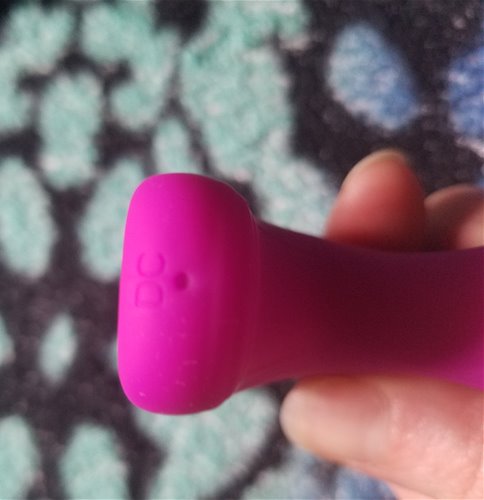 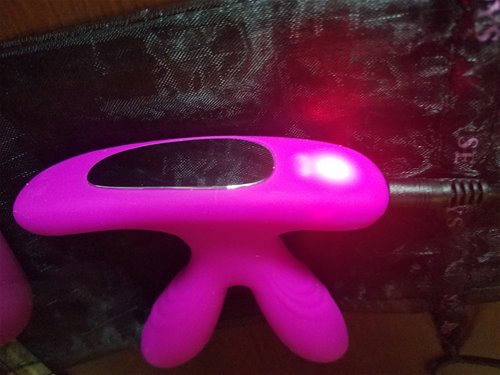 *Cleaning*
Cleaning is easily done with any toy cleaner and warm water. Towel pat dry and then it's ready for storage! Avoid using over the counter soaps to clean it. Over time antibacterial soaps create little pores in the product that make it easier for bacteria to get trapped (which could lead to health problems).

For storage I like to keep my toys in plastic bags, it helps keep them sanitary at all times and they store easily into a bin that slides under my bed. It also prevents toys from damaging each other, and keeping all the components together.

I had mixed results with the vibration intensities. The steady vibrations were of a decent strength, however any pattern I used had a much lower strength. Each piece has its own motor; whereas on the image it says a "2" is a lower strength than the "3", although I found each motor to be an equal "2" rating.

The heads have a lot of flexibility to them and the material allows for the vibrations to kinda carry throughout the entire toy. This allows for a moderate vibe in the upper, and a weaker vibe down towards the base (which is indicated by the "1").

Also, the motors are not exactly quiet. This is a toy you might be able to get away with if you don't have a roommate on the other side of the wall. Otherwise, this is a toy best suited for couples who don't care about noise or solo living people.

I think the Frodo meme below kinda sums it up for me. You definitely know you're having one, but it wasn't the best I ever had or anything. No big fireworks, and for me, too much effort. 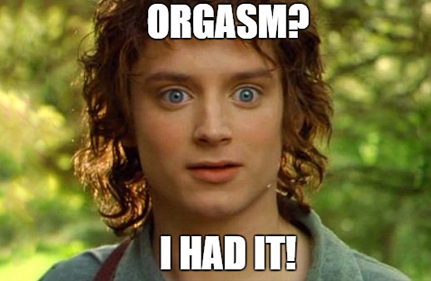