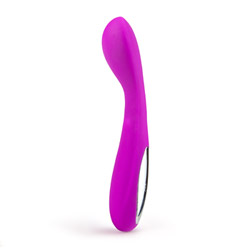 The first use we found is to simply slide the toy into your panties, allowing the bulbous end to rest against the clit. If the toy is turned off, it's actually comfortable enough, and gives enough, that you barely notice it's there. If it's turned on, the vibrations are quite nice, and especially if you choose to move the toy around on your clit, it can be rather stimulating and enjoyable. You may even be able to use a pair of crotchless panties to hold it in place while it's taking you - however, we did not test that.

The Flexi is made of silicone. It is smooth, non-porous, and odor free. It is hypoallergenic, latex-free, phthalates-free, and body safe. The vibe is fairly flexible, which at first seems to be a draw back but can actually be quite nice. It is well suited to both beginners and experienced users.

The Flexi has a slightly angled, bulbous head. It is 6 3/4 inches in length, with 3 3/4 inches being insertable. It has a diameter of 1 1/8 inches. The flexible shaft leads to various possibilities which are great for teasing. It can be easily placed in a bag for travel and is suitable for all users.

The Flexi has two buttons. One turns the toy on and off, the other one cycles through the 30 various settings including pulsating, steady, and escalating vibrations. While I believe the motor is in the part of the shaft right before where it bends, it is easily felt throughout the entire toy. It is easy to use, and not overly loud. It is quieter when inserted, but the noise could be easily covered up anyway.

The Flexi is waterproof, making cleaning very easy. Use your favorite toy cleaner or soap and water to clean it. It can easily be stored in a bag or toy chest, just remember to store your silicone items separate from other toys (in their own little bag/pouch) to avoid damaging the materials. Likewise, please only use water-based lubricants with this toy.

The Flexi comes in a clear plastic bag, which is placed inside of a black, see-through mesh bag. The mesh bag/pouch would work great for storage and has the words "Sex Toys" written on the drawstring. It also has a charging cable with it.
This product was provided free of charge to the reviewer. This review is in compliance with the FTC guidelines.