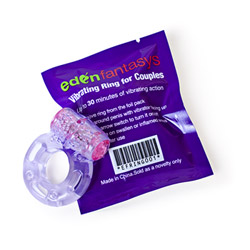 Fun little addition to the party

I wouldn't go as far as to say that this little guy was fabulous, but it certainly wasn't a disappointment. I later picked up a longer lasting sleeve that allowed for a battery operated bullet to be inserted, and I likely would never have done that if not for this little test run. This is quick to pick up, open up, and use. It's also easy to hide away when you are finished, and if it isn't your thing, you won't be upset about the price tag.
Pros:
Quick and fun, disposable, cheap, good for beginners
Cons:
Doesn't last long, isn't very strong
Rating by reviewer:
4
useful review
It's been a while, but let's start with my impressions. This thing didn't pack a lot of power, but was a fun little addition to my solo time. I used it to add a bit of Vroom to my non-vibrating toys, which was a really interesting experience. Not that I believe it'll manage the widest of toys, but then again, if you are actively inserting something that large into yourself, vibrations will likely be the least of your concerns.

I did not get around to testing it with a partner, which means I don't have a lot to say about putting the "cock" into the cock ring, but I imagine that this toy would be well suited for anyone who is just starting their travels into vibrating toys and intercourse enhancers. While this little guy won't make a large difference once it gets really hard and heavy, it can enhance the slower strokes and build up. It would almost certainly make it a lot more pleasant for those women who aren't as able to get off on penetration alone.

All of that being said, it didn't last all that long, as you might imagine. Although cleaning it will extend it's lifespan, usage of this little pleasure button quickly wore it out. The batteries aren't build to last, and the actual ring was starting to sport tears. It was fun while it lasted, and a great introduction into this type of toy. Pick one up, give it a run, and then toss it when you are done.
Experience
If used solo, I highly recommend using it with glass toys, if you are into them. It is a very different experience to the typical vibrators you can pick up, and I, for one, can't comfortably focus on both my dildo and a bullet at the same time.
This content is the opinion of the submitting contributor and is not endorsed by EdenFantasys.com