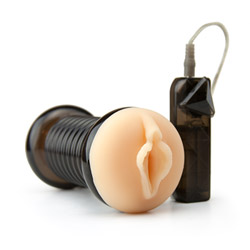 This toy has super realistic looking and feeling. It's elastic and stretches enough to let you in squeezing around you as you go to town gently! It comes with a vibrating bullet as well that you can incorporate for extra stimulation, and with a little lube this is the perfect toy!
Pros:
Vibrates, Fits most people, Extremely realistic feeling, Easy to grip, Easy to clean
Cons:
None
Rating by reviewer:
5
No votes for this review

This is a great toy for experienced users or beginners who are completely new to male masturbators. It's even great for couples who want to introduce another fun element. You could, for example, use this to pleasure yourself while your partner sits on your face, or does a strip-tease dance for you.

The toy is made from TPE that feels surprisingly close to the texture of real skin. It's soft, plush, and extremely elastic which is perfect for this kind of toy. On the outside you have a little bit of texture around the opening of the vagina that looks like the inner labia. It's more for visual stimulation than physical as the lips stretch apart when using the toy and don't actually make any contact with your skin.

The inside of the toy has a noduled texture that's kind of like small raised bumps with ridges all around them. It doesn't really feel like the inside of a vagina, but it does add a lot of texture to the inside of the toy for extra stimulation. You can't feel every little bump and ridge with your penis, but the whole thing as an experience is significantly more pleasurable than using a toy like this that's just a plain sleeve with no inner textures.

The material is also nice and plush so even with the harder plastic outer casing on the toy you only feel the soft, wet squish of the vaginal canal.

This is a male masturbator designed to look like a pretty realistic vagina. The top part of the toy has the opening for your penis and looks like the hole and inner labia of a vagina. The hole is just a thin slit, but it can stretch significantly. I was able to fit quite a bit of my hand into the toy and was only stopped because of the plastic casing. When you insert yourself into the toy, it does squeeze around you because of its elastic properties, but it doesn't squeeze in a painful way because the elasticity isn't that strong. It just kind of lightly squeezes you while the motion of thrusting the toy up and down adds the most sensation.

It's easy to hold in your hand while you use it and is about the size of a soda can in thickness. At about six and a half inches long, it's thick and long enough to accommodate most men. If you're on the longer end, you might want to omit using the vibrating bullet though because that is just put into the same canal that the penis goes into.

It's a perfect toy for beginners, advanced toy users, and couples alike! Truthfully, I would suggest this to beginners because it's going to be a much better quality than the cheap toys generally marketed towards beginners.

It's definitely not discreet enough to just leave out in the open as there's a big obvious vagina on it. However, it is fairly small and can be easily kept in a bedside drawer or something like that.

The toy comes with a small bullet vibrator that's powered by two AA batteries. It's just like your typical bullet toy. You put in the batteries, turn the little dial, and the vibrations come on and then get a little stronger if you turn the dial more. The bullet is inserted into the back end of the toy, though it's still the same opening that you actually put your penis into. While the vibrations do add more stimulation, sometimes the bullet can kind of travel up the canal and bump into you which is startling. This can be prevented by taping the cord for the bullet onto the plastic case of the toy to keep it from moving no matter how enthusiastically you're thrusting.

Even if you decide to omit the bullet, this is just a fantastic toy. The material is soft and provides comfortable feeling, and with some lube that's been warmed in warm water (or not), it feels incredibly similar to having sex but without nearly the same amount of physical work.

This toy is very easy to keep clean. It really should be cleaned out after each use to prevent it from getting any kind of mold or bacteria growth. You can spread open the hole and run warm water through the canal. I also like to wrap a washcloth around a bottle-brush (for cleaning baby bottles) and shove that through the canal of the toy with a bit of soap on it just to make sure everything is cleaned out. When it's completely clean, do your best to pat it dry and use a bit of cornstarch on the outside and a small amount on the inside to keep it from getting a tacky feeling.

You can use water or silicone-based lube with this toy.
This product was provided free of charge to the reviewer. This review is in compliance with the FTC guidelines.

Reviewed by Princess-Kayla ♥ (Eden Writer) Not a shred of evidence exists in favor of the idea that life is serious.
Rank
6.6
wrote 201 reviews
Comments
Make a post
Forum
No discussions yet.
Thank you for viewing Hot ride – sex toy review page!
Top