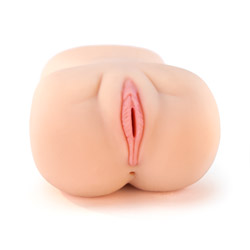 Realistic vagina and ass
by EdenFantasys

Not what I had expected...

A friend of mine got me a big enough suction cup from the hardware store, used it in the shower or even in my bedroom and used it hands-free, however as previously stated, it does require a bit of pushing into either hole of the toy.
Pros:
Add a suction cup and use it in the shower :P
Cons:
A bit bigger, tighter than I've expected, get rid of the hole at the other end.
Rating by reviewer:
3
No votes for this review
When I received the item, they toy was smaller than I had expected. A LOT smaller. Fits in your hand well, however, at first use, you have to use both hands to push your cock inside it. It does feel a bit tight, but because of whatever lube you do end up using, it does become slippery and messy during use.

When pushing into the anus, it's just as difficult as pushing into the vaginal opening. It feels about the same in regards to tightness. You do have to squeeze the toy to get it to feel...tighter. This toy also does not feature any travel bags or cases for discreet carry-on.

It's been some months since I've last used this toy. Personally, it's not for me, probably better off as a beginner toy for someone that enjoys solo play. If you are looking for something that meets your expectations, I'd shell out some more money for one that's more "human-sized,"

I suppose the other annoyance I found with this toy is that the hole is on the opposite side of the toy. With water-based lubes, the lubrication dries out after a few minutes of use. The best way I could remedy this was to get a suction cup large enough to plug the hole and stick it against a flat surface for hands-free use, as well to retain the lubrication within the toy.

It's not recommended to use any plugs or any other toys like bullet vibes. Could cause too much tightness while inside the toy and could become uncomfortable. But as I said before, if you are looking for something that isn't a "beginner" toy, look for something that is more "human like." If you feel like shelling out an extra few bucks for something that is tighter, feels great, and won't have to re-lube after a few minutes, try something else.
Experience
It has been sometime (about 4 months) since I've last used this toy. Gel lube like KY works the best. Clean with soap and warm water after use. It's also helpful to keep it somewhere like a designated toy closet/drawer.
This product was provided free of charge to the reviewer. This review is in compliance with the FTC guidelines.

My Annabel realistic vagina and anus tags
About author