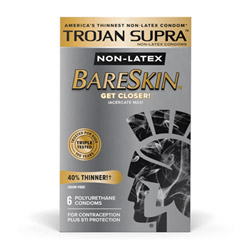 I don't think these condoms live up to the marketing hype and I don't have a latex allergy so will go with some better latex options when I need condoms. But in terms of non-latex condoms I've tried these are an inexpensive good overall choice that are solidly built.
Pros:
Non-latex
More sensensation
Cons:
Doesn't transmit body heat well.
Rating by reviewer:
4
No votes for this review
So I rarely use condoms once I'm in an established long term relationship unless my partner gets sick and can't take their birth control pills (happened with my current girlfriend). My ex-girlfriend ended up getting an IUD so she didn't have to mess with pills or rings. Anyway, that aside my penis is not very sensitive so ultra thin or ultra sensitive condoms are a must for me to feel anything while using them. Exploring the world of ultra thin condoms to see if I could find something better than the Durex Extra Sensitive condoms that were my favorite at the time I tried these. They marketed a bare no condom fit/feel.

The fact that they were made of a non-latex material was not a selling point for me. These condoms were solidly built and I had no concerns about the safety/durability while wearing them. They were comfortable and though they did not live up to the marketing they were an improvement over regular condoms. They still fell short in comparison to the Durex Ultra Sensitive in terms of sensation and body heat transfer. They also weren't as good as the Durex Avanti Bare, which I would argue are a better choice for those looking for ultra sensitive/thin non latex condoms.

These condoms didn't have any noticeable odor/flavor.

They are cheaper than the Durex Avanit Bare condoms if you are worried about price. I honestly gave these a try as wanted to see if they lived up to the marketing and pricing hype. I really struggle to enjoy sex while wearing condoms since I'm not overly sensitive to start, so felt it was worth trying out new condom options when I was needing them to see if there was a better option out there. And if you need a cheaper solidly built non-latex condom then this is definitely a good option as they aren't much different in overall enjoyment compared to the Durex Avanit Bare condoms.
This content is the opinion of the submitting contributor and is not endorsed by EdenFantasys.com