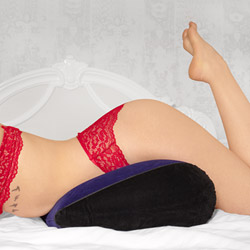 This is a wonderful addition to anyone's sex life. It's great for multiple sex positions and gives you just the right amount of height under your hips so you can really hit that sweet spot! Since it can be deflated it fits perfectly in any drawer or even luggage if you want to take it on the road. It's comfortable and fun to use and since it's made from PVC it's extremely easy to keep clean!
Pros:
Inflatable, Soft, Travel Friendly, Comfortable
Cons:
A little pricey
Rating by reviewer:
5
No votes for this review

This inflatable position pillow is great for adding a little lift to sex. It's about six and a half inches tall when it's completely inflated, and since it's wedge shaped you can use it in several ways. You can have it under your waist in doggy style position to help your waist stay up if you need to give your arms a break. You can also lay back on it and use it for the missionary position. It's even great to get your waist up in the air for a better oral experience.

It's also made from PVC which is pretty water resistant, which is an excellent quality for a sex cushion. You still need to wipe it down after use if you don't want it to get nasty but it doesn't really hold onto wetness or smells or anything.

It's nice because it can deflate and be folded up into a small roll that can be put into a bedside drawer or a suitcase if you're traveling.

The cushion is made from PVC and has a kind of soft texture to it. It's a bit like velvet but not nearly as "fluffy" feeling. It's comfortable to lay on naked and the seams along the edges are folded down so you don't have that kind of sharp seams that inflatables sometimes get. The PVC is also pretty waterproof. A little wipe-down with a damp rag after using it keeps it clean.

The wedge-shaped design is perfect for different sex positions including oral. It's nice to have a few inches between your butt and the bed, and while pillows work they're often big and in the way. When fully inflated this cushion is only about six and a half inches tall and twelve inches long with a fairly gradual incline.

To inflate it, there's just a little air spout thing like you would find on a pool raft or something similar. It's the kind that doesn't let much air in or out unless you squeeze or bite down lightly on the bottom half of the valve.

It's a really all around well-made cushion. I'm about two-hundred pounds and I can lay on it and move around all over it and it hasn't had any problems deflating during use or anything. If you inflate it and then leave it alone for a couple days it starts to deflate but it's easy to just blow it up again. 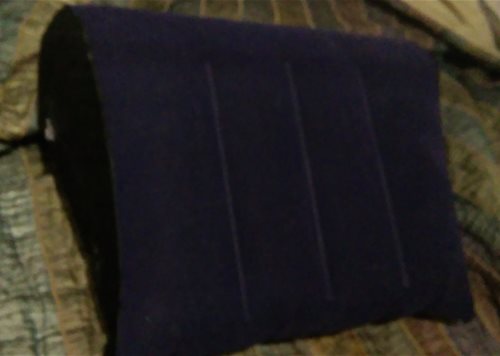 I'm very happy with how well this cushion works. I was worried about it being inflatable and me being fat, that it would have issues staying inflated but I've been able to lay on it and bend over it without any problems. It's also tall enough that it's really fun to use. Pillows just don't have that kind of height without having several pillows jammed under your back as well as your butt. I have chronic back pain, so the ramp design really helps keep everything comfortable.

I also love that since it's inflatable it can be folded up pretty small. There have been numerous times when my husband and I go on vacation that it would be great to have a position pillow with us, but all we had was a pretty huge one that wouldn't fit in the car with all the luggage. Plus I couldn't drag a position pillow through a hotel lobby without feeling incredibly awkward. This one just rolls up like a sleeping bag and can be stuffed right into your luggage without taking up much more space than a shirt would.

It's made of PVC so it deflects water but if you have an especially messy time on it, you can wipe it down with a damp rag and then let it air dry. You can also use a little mild soap if you need to for something like silicone lube which is a little harder to clean off of things.
This product was provided free of charge to the reviewer. This review is in compliance with the FTC guidelines.

Reviewed by Princess-Kayla ♥ (Eden Writer) Not a shred of evidence exists in favor of the idea that life is serious.
Rank
6.6
wrote 201 reviews
Comments
Make a post
Forum
No discussions yet.
Thank you for viewing Inflatable position pillow review page!
Top