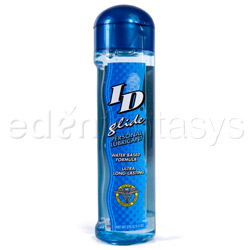 I Won't Be Gliding Anymore

A slippery, reasonably long lasting, toy and condom safe, water based lube. Unfortunately it has glycerin and parabens in it so if you have sensitivities to those or wish to avoid them, pass this one up. If you're not worried about those things, this is a very functional product, as long as you don't taste it.
Pros:
Slippery, lasts a while
Cons:
Glycerin, parabens, chemicals, awful taste
Rating by reviewer:
3
useful review
I've used ID Glide for years now. It's been my standby lube and I have a large bottle of it. To be fair, I've never had a reaction to it and I've never had any ill effects from using it. On the whole, it's not the worst lubricant on the market. It's water based, making it safe for use on all toys including silicone and on latex condoms. It's slippery and it lasts decently long without needing constant reapplication. I suppose I used it because I wasn't really dissatisfied and I didn't know that better existed. It's ingredients are as follows:

The bottle is clear blue and transparent making it easy to tell when you're running out. The label is the only obstruction to this. The label makes no question of what is inside, but you could probably peel it off if you want it to be more discreet. It comes in a conveniently large range of sizes, from 1 to 17.5 ounces. The flip top makes for no muss no fuss on handed dispensing which helps in the heat of things and lube doesn't end up all over the outside of the bottle which is nice. It has a really awful, chemical taste to it, and a slightly sweet, but not overly strong smell and it does leave behind a sticky residue which always makes me want to take a shower immediately, but fortunately, it cleans up with soap and water. On a similar note, because it is water-based, it's not ideal for playing in the tub or shower as it will be washed away quickly.

I'll be switching to avoid the pesky parabens, glycerin and other chemicals, but other than that, it's a decently functional product.
Experience
While I can't say I've had any bad experiences or reactions to this lube, I will be switching. I'm no longer using this lube primarily because the ingredients worry me. Although I've never had a reaction that I've been able to note, I've gotten infections from other lubricants containing glycerin which have caused me to worry about the contents of this one, and I've started to learn about the dangers of parabens and some of the other ingredients which have caused me to seek out an organic, natural lubricant which has none of these pesky things. That said, I can't say I'm really unhappy with ID. I've never experienced burning or irritation, and other than the stickiness once it dries, I've really not had any complaints.
Follow-up commentary   I still don't like it 6 months after original review
I've found better, more natural products that I am much happier with than I ever was with this product. I didn't realize how much I was settling with this stuff.
This content is the opinion of the submitting contributor and is not endorsed by EdenFantasys.com

My ID glide tags
About author