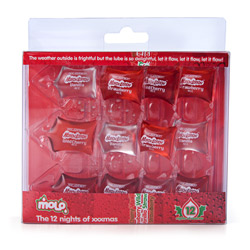 The First Night of Christmas-Done

If you've been naughty, Santa will probably gift you this motion lotion set because you're going to end up high and dry thirty seconds into penetration. However, if you liked the taste of wax bottle candy as a youngster, you can breathe heavily over this product and get it stuck on your tongue during some short-lived warm oral play.
Pros
Not too hot for those with warming sensitivities
Cons
Thin, greasy, short-lived
Rating by reviewer:
1
extremely useful review
So, despite the catchy name and clever idea of packaging 12 of these 4CC pouches of "lotion", after the first night of Christmas, I lost interest.

Taste: This "lotion" tastes like those wax bottle candies that you got as a child, and it loses flavor just as fast. I would agree with the review that says this has a medicinal taste that overwhelms all three of the flavors.
Flavors are: Wild Cherry, Strawberry, and Vanilla
I eventually did open all three flavors, and if I had to use one, it would be the vanilla.

Smell: It has a little bit of a noticeable smell, but it's more plastic-like than anything. In addition, it's not there to stay...And neither is the lotion. This is where the real con comes in with texture.

Texture: It's thin and greasy, and I would describe the feeling as washing a measuring cup that has just had vegetable oil in it. It doesn't lubricate anything because the liquid seems to disappear while the greasy feeling stays. I literally reapplied over and over without ever being lubricated enough.

Packaging: I had to twist the top in one direction and then in the other direction before it finally came off. When it did, it trickled out immediately without stopping. However, if I squeezed it slightly to increase the flow, it shot out almost directly horizontally. This caused some laughs, but wasn't much in the way of a turn-on.

Function: As a warming agent, it works if you blow heat directly on the area that it's been applied to. Yet the effects seem to wear off quickly as well. Actual motion doesn't seem to warm this up hardly at all. I guess this would make it an option for those who find warming lubricants to be too overwhelming.

Ingredients are a mixture of water, color dyes, fruit extract, a thickening agent, and aroma. Glycerin may be your only problem if you're sensitive. Generally glycerin itself has nothing that especially promotes yeast infections, as I read on another review. Plus, after doing some research, it is super rare to have an actual allergy to glycerin. Beware of staining due to the coloring.

Wash with soap and water, or you'll never get the greasy feeling off.
Experience
It drips alllllll over. I was finding drops on the floor a day later. Interestingly enough, it lasts on the floor, but not on your body.
Follow-up commentary   I still don't like it 25 days after original review
So, the fact that I have let this set sit in my room untouched since the last review proves that I'm not impressed. I still think of the packets as little bombs of lube that will burst all over your room. I still find that I'd rather buy one decent sized bottle of lube, rather than messing around with these. I suppose if you're just looking for a small thrill and then throwing these in gift bags or something is still a good idea.
This content is the opinion of the submitting contributor and is not endorsed by EdenFantasys.com