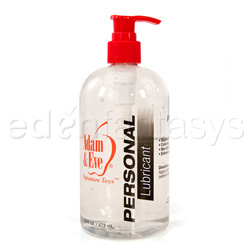 It's nice and slick but I do find I need to keep reapplying it. It doesn't exactly dry up, but instead becomes tacky rather than wet. This also means that after using quite a bit of it it tends to form a layer on your hand and generates little balls of rolled-up, drying lube. I wouldn't say it is a bad lubricant, as it does its job well - you just have to watch out for the residue. If you spill it, which is easy to do with a handful of lube, it will leave a stain on your bed/other materials. It's easily removed, but easily pretty noticeable until then; this also goes for wiping the residue off your hand.

The smell is slightly chemical, but nothing distracting or noticeable during the act. I wouldn't nominate it for the best taste of the year, but for oral contact after using this lube, it's not enough off-putting to be a show stopper. If you've been using it for extended play, though, the aforementioned residue is very unpleasant for the tongue and will probably need to be wiped off with something wet.

Overall this has served exactly the purpose I wanted it for; easily dispensable lube in a large quantity that doesn't taste terrible. I wouldn't say it's the best lube, period, but it is definitely the best I have used so far.
This content is the opinion of the submitting contributor and is not endorsed by EdenFantasys.com

My Personal lubricant tags
About author

Reviewed by Sinsemilla (Eden Advanced reviewer) Naked you will see that we are all the same.
Rank
5.3
wrote 4 reviews
Comments
Make a post
Forum
No discussions yet.
Thank you for viewing Personal lubricant review page!
Top