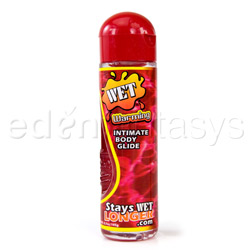 Overall this is a pretty good lube. It feels good, leaves no nasty residue on your skin and lasts for quite a while. However after fifteen to twenty minutes it starts to burn with a vengeance!
Pros:
Works well, Last a long time
Cons:
Burns like the fires of hell.
Rating by reviewer:
3
somewhat useful review

This product has a nice texture to it. It was very naturally wet-feeling and lasted for a good amount of time. It didn't dry up and it left no nasty residue on either of us, which I'm really thankful for. I hate the ones that leave you all sticky feeling! This one definitely doesn't do that.

It had an alright taste. It isn't something I'd water at the mouth for, but it was decent overall. It didn't have any strong odors which was nice. Very aromatic.

It lasted for a pretty good while. However after about twenty minutes of sex, it starts to make a fire. Once it starts to burn it completely kills the whole mood. We both had to take a cold shower to get it off and to ultimately get it to stop burning. It might be possible that we're both allergic to something in it but I have no idea what it would be.

This product is good as far as lube goes, but it doesn't just warm, it burns!
Follow-up commentary   I still don't like it 4 months after original review
I still don't like it. It still burns my partner and I so we don't use this product. We haven't tried any other lubes with warming sensation yet either to compare. It kind of ruined it for us. But it might be different for you.
This content is the opinion of the submitting contributor and is not endorsed by EdenFantasys.com

Reviewed by DCrizl (Eden Reviewer) You like it.
Rank
4.3
wrote 8 reviews
This review was edited by
Comments
Make a post
Forum
Thank you for viewing Wet warming – lubricant review page!
Top