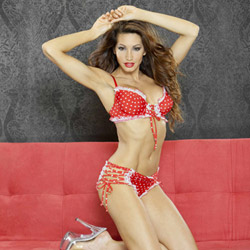 Other Perfect pin up bra and panty set reviews

Honestly, if you don’t really have a butt at all or you don’t mind them sitting half mast, causing your cheeks to mushroom over, then they could work for you! Then you have the bra which caters for those who have average to a little extra in the chest region; best suited to a C – D cup. This one has the potential to be a cute set, but failed for me.
Pros:
~ Tie sides
~ Nice red shade
~ Tie up bra
Cons:
~ Panties made for 12yr old butts
~ Bra more suited to C or firm D
~ Unbreathable lycra
Rating by reviewer:
2
extremely useful review
FIRST IMPRESSIONS:

Although I’m not a big fan of red, I simply can’t resist a sexy item of clothing that has tie up sides. I knew at the time of ordering this set that it wouldn’t fit me quite yet, or at least not to my liking. I had wished there was a larger size, but my compulsive side won and it ended up in my order. When it arrived, it reminded me of a bikini. That was ok, but then I turned the panties around to find there was no room for an adult sized butt.

Fantasy lingerie are the creators behind this little number and it’s made in China. My main pet hate for clothing made in China is, most of their population have small frames and are slim, so most of the clothing made there seems to be made that way. The bottoms in this set certainly follows that trend.

The Perfect Pin Up bra and panty set comes in a standard red shade with medium sized white polka dots all over. It also features white trimmings and is available in a S, M or L.

The set is 92% polyester and 8% spandex which means it’s created from lycra. Naturally, it will happily stretch in every direction. Unfortunately, this didn’t help much in the ass region. Running along the top edge of the cups and the bottom of the bra is a frill of soft mesh. The panties feature the same edging only on the outer sides of the leg openings. Down each side of the panties and the middle front on the bra are white lacy panels that sport metal eyelets. The ties are crafted from the same red and white lycra with plenty of length, especially on the panties, for adjusting.

I bought this in the L, but would have much preferred it in an XL had it been on offer. The lingerie pictured below is modelled by Eve. Her measurements are 37", 33", 42" and she has a D cup.

All measurements below are gained by measuring across a flat garment.

If only these were made with adult sized butts in mind, this could be the cutest set. The waist and leg bands are ¼” wide red elastic. Down each side is two rows of five metal eyelets which allow the straps to be pulled as tight as requires without putting pressure on the fabric. When the ties are on the tightest, there is an extra 30” for each strand. In the middle of the top front edge is a short vertical elastic gathering with a small white bow stitched to the waist band. This can easily be taken off. Around the outer edges of the legs is a ¾” frill of white mesh. Although it is a soft-ish style of mesh, there is none placed around the groin area so it can’t cause any irritation. There is a reasonable sized white cotton panty liner which is only stitched in place on two sides.

Waist Band:
Tightest un-stretched: 11 ¼”
Tightest stretched: 18”
There’s so much in the way of ties that these could fit up around a 50” hip circumference. But they wouldn’t be comfortable due to the lack of ass coverage.

The image below is Coquette’s XL Full Back Panty with Heart Cut Out laying underneath to show how much extra coverage is missing from the panty of this set. Naturally they would be different due to a size difference, but it gives a basic idea of how little butt room there is in the Pin Up set ones.

Like a standard bra, this one has adjustable straps that range from 9” up to 17 ½”. Where the straps attach to the top of each cup is a small white ribbon bow. Across the top edge of the underwire cups is a strip of elastic and gathered white mesh. Between the breast area is two rows of three metal eyelets on strips of white mesh in which ties thread through allowing the bra to be full adjustable. If the ties are removed completely the bra becomes two pieces; there’s nothing but the ties (and the back closure of course) holding the two pieces together. When on the tightest, there’s a good 16” on each remaining cord for tying a bow. All the way along the bottom of the bra is a matching hem of the same white gathered mesh as featured on the top edge. The back closes with one row of two hooks and three rows of two eyes.
Experience
All seams are finished off neatly with no loose threads, ribbons have Stop Fray on the raw edges and the mesh edges have a red rolled hem.

The instruction tags on this set say it’s machine washable which is a blessing for those us who just don’t have time or would rather be doing anything else other than hand washing! Because red is such a strong colour and often bleeds at first, I washed mine with other red and black items to be on the safe side. It can be tumble dried, but I just hung mine on the line.

My set arrived wrapped up in Eden’s typical pink tissue paper. I quite like the tissue paper, as it’s reusable or easier to dispose of if you don’t have a use for it.

Panties that don’t cover my ass crack just frustrate the crap out of me. I don’t like my ass hanging out of anything; to me, it’s simply NOT sexy at all on either sex. If you do carry extra weight (particularly the squishy type), the tie sides of these are highly likely to create rolls which push the sides down. They just don’t sit nicely.
I found the leg openings somewhat snug even though I had the ties open. But I’m not downing them for that, considering these are only a large size. Even if they did make these in larger sizes, due to the lack of panty depth in the back and smaller cups, I’d probably have to go for a 1X/2X to get them to fit right. I’ve had Fantasy lingerie before and found the sizing fine, but they dropped the ball on this set.

Only 2 stars from me!
This content is the opinion of the submitting contributor and is not endorsed by EdenFantasys.com