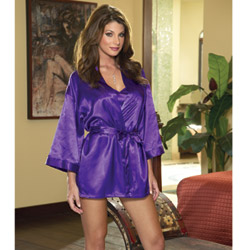 Other Purple robe and babydoll reviews

Alright, Let's Do This Thing

This is not a good buy. It's just that simple. As a person who has an hourglass figure, I have serious doubts that this would fit most body types because of how terrible it looked on me. Smushed boobs...slick straps that slide everywhere, anytime they please...it's a nightmare.
Pros:
Color
Cons:
Cut and Design, Extremely Slick, Flammable, Wrinkles Easily, Huge
Rating by reviewer:
1
extremely useful review
I was extremely excited to see this royal purple robe and chemise from Dreamgirl in Eden's line-up. I jumped on it as soon as I possibly could and anxiously awaited its arrival.


The robe and chemise arrived in a thin, plastic garment bag on a padded, polyester covered hanger that matches the same royal purple of the robe and chemise. The price tag was attached to the garment itself with a tag gun. When removed, this created a tiny hole in the garment right near one of the side seams of the robe. The care instructions say to hand wash, without bleach and do not use an iron.


The material is 100% polyester and it's a very thin, cheap polyester at that. It wrinkles at will and there isn't much you can do about it, other than to starch the hell out of it. If "stiff as a board" is your thing, go for it. I wouldn't want the chemicals on my skin, but that's just me.


The straps on the chemise are attached to the top of the triangles that serve as the "cups" of the garment, but they are not attached at the back. You are supposed to slide the straps through two looped holes about midway down the back of the chemise. You can do this in one of two ways:


1) Take the straps and thread through the same side to create more of a tank top back and then tie the two straps together, first into a knot and then into a bow.


2) Take the straps and cross them over each other and thread through the opposite hole, then tie the two straps together, first into a knot and then into a bow.

At the bottom of the back of the chemise is a key hole cutout that you close in the same manner: first a knot and then a bow.

The front of the garment is styled like a typical chemise---triangular cups and v-style neckline.

The robe portion of the garment is your standard loungewear-type robe. The sleeves are designed to be 3/4 length, meaning they are supposed to hit a few inches above your wrist so that you aren't drowning in material. They are also oversized for lots of "elbow" room, as it were.

I had plans for this outfit that night and my eagerness to wash it and get it on before my husband came home outweighed my common sense
Experience
Whomever created the pattern for this garment has obviously never seen a female body in their life. Unless you have a breast augmentation, there's a really good chance that your breasts sit just a little bit lower than they did when you were 13 and just started developing. I know mine do.

So this brings me to our first problem. When the chemise was pulled tightly and knotted in the back, the front of the chemise cut my breasts in half. So there was a pooch on the top and one on the bottom and a clear line between the two.

And this brings me to our second problem: the straps. It's polyester, okay. One of the slickest fabrics known to mankind. Since the straps aren't attached to the back and don't have those fabulous slide clips that adjustable straps have, they slide up and down through the two loops that's supposed to secure them in place. This meant that whenever I sat down, the garment would ride up in the front and slide down my back.

Now our third problem: trying to get into the damn thing was an absolute nightmare. It arrived with the straps in a criss-cross pattern. I tried to get into it that way, and spent almost thirty minutes contorting in every position imaginable to get it tight enough. So, I tried to tie them in the tank top style and spent another thirty minutes trying to make that work. An hour to get dressed because I can't figure out how to do it by myself = one pissed off little girl.

And the fourth problem: sweat. When I wear the robe, I instantly start sweating. It's like my body just can't handle that much polyester covering it and is begging me to take it off. And sweat on men is sexy, but a woman just sitting on the couch drowning in her own perspiration is not. Once my husband got home, I asked him to help me fix it. He spent another thirty minutes messing with it and I finally took it off and turned it around. The front of the chemise was the perfect cut for my back. It looked stunning, to be honest. But, uh the back on the front was ridiculous. Which brings me to something else...what the hell is the point of having a key-hole cutout just above the tail bone? The two pieces of fabric overlap each other, so tying it is completely unwarranted and you can't see anything anyway.

Overall, the sizing and cut of this outfit is completely wrong. I swim in this thing, being less than 100 lbs with a 32B bust, 26 inch waist and 29 inch hips. I mean I know it's supposed to be oversized, but this is really really oversized for a small. An XXS would have been better. I would go so far as to say that if you wear a medium size in clothing that the small would be perfect for you, you know minus all of the other flaws. And it's a damn shame because that purple is fantastic!
Follow-up commentary   I still don't like it 2 months after original review
I threw it away. I would have set it on fire and sent it into the air if I wasn't worried about the chemicals and having a fire rage out of control. (Have you ever set polyester on fire? It goes up like a Christmas tree on a bonfire in January.)