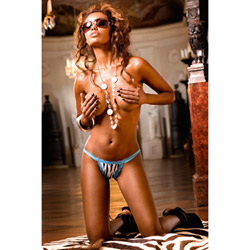 For the price, you can't go wrong if looking to add a thong to your collection. There's not much to it, but it should put up with some use and abuse before needing to be replaced. It'll easily fit everybody the chart says it will, and even a little bigger. On top of that, they're comfortable enough to wear all day long.
Pros
Will fit listed measurements on size chart, Comfortable, Well made
Cons
Will eventually have to be replaced
Rating by reviewer:
5
extremely useful review
What are you telling me about today?

I'm telling you about a surprisingly awesome thong from Baci. It doesn't look like much, even when you first pull it out of the package, but it's a great piece to have.

Tell me a bit about the packaging.

Not much really. It's Baci's envelope in an envelope type deal, with the thong inside the inner envelope and the outer having a photo of a model wearing them on the front and back. The back (and a tag inside the thong) also tell you the size, that it's 90% Polyester and 10% Spandex, and should be machine washed warm and tumble dried low. It also says not to iron or dry clean.

I had previously gotten a pair of Baci undies in a medium, expecting them to run small. When they didn't I realized I could easily get a small in all of their undies, so that's what I got here. According to Baci, that means that I should have hips of 34-36" and weigh between 90-120 pounds. The top of my hips is about 34 1/2", around my butt is about 38 1/2", and I weigh about 125. These fit perfectly. There was no cutting in, and it was very easy to forget that I was wearing them at all.

That's awesome! Can you tell me more about the thong?

Absolutely. It's shaped more like a g-string than a traditional thong, and there's not much to it in general. A triangle of zebra printed fabric covers an area about 3 1/2" across by about 5 1/2" tall. Surrounding that is a light blue lace trim about 1/2" thick on all sides, and attached to that is a light blue elastic that makes up the waistband and the part that sits in your butt. When laid flat, it measures about 13" across but stretches up to about 20". At this point though, it's probably going to dig in and be unflattering.

For a six dollar thong? Pretty great. There was a loose thread that was easy to remove, and aside from that I found nothing really wrong with it. The elastic will likely wear out at some point, but until then I'm going to enjoy the hell out of it.

Yep! I've got a few of the thong itself, and one where it sits on my hips to show you how it doesn't cut in at all.

Experience
I hemmed and hawed at getting this one for a while. I was never a huge fan of thongs, but lately have been wanting to add a few to my collection. I am beyond happy with it. For the price, I half expected it to be a lot worse on quality, and maybe only last through a few wears and washes. But I think it'll be in my collection for quite a while.
This content is the opinion of the submitting contributor and is not endorsed by EdenFantasys.com

Reviewed by Jul!a (Eden Writer) To the critics who despise us, go ahead and criticize us. It's your tyranny that drives us, adding fire to the flame.
Rank
7.5
wrote 560 reviews
Comments
Make a post
Forum
No discussions yet.
Thank you for viewing Zebra microfiber g-string with lace trim – sexy panty review page!
Top