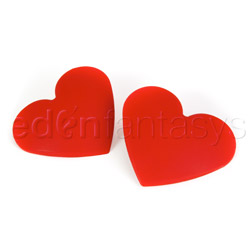 I hate to be the one negative review on something I wanted so badly to love, but these pasties just aren't all they appear to be. In theory you'll get a pair of body safe, reusable pasties; something you can enjoy over and over again for a long time to come. What I received was a pair of pasties that while cute, don't cut it for what I need them for.
Pros:
Are cute when they stay on, Silicone
Cons:
Don't seem to want to stay on very well, Can be clunky under tighter shirts
Rating by reviewer:
3
extremely useful review
Having to go without a bra has often meant wearing something black and/or baggy. The invention of pasties helped make it so that you could go braless without showing the whole world that you weren't wearing a bra. The big downside to a lot of them is that they were a one time use kinda deal, and left you needing to replace them on a regular basis. These pasties claim to be reusable and last for a long time, but are just a little bit lackluster.

The box they come in is nice, but probably won't hold up to long term storage. It comes with a cardboard flyer and the pasties nestled in a plastic tray complete with plastic backings to keep the pasties relatively fresh and free of lint and other debris. The pasties themselves are made of silicone. The outer layer is soft, matte and smooth; and the layer that's supposed to adhere to the skin is a bit stickier and dimpled. The front doesn't collect much in the way of lint, but the back with the adhesive does. They're each 2 3/4" across at the widest point and 2 1/2" tall from the bottom point to the tallest point of a top curve. In the middle of each heart is an indentation about 3/4" wide for your nipples. Pierced nipples with short barbells should be fine, but large jewelry will get in the way.

There aren't any specific instructions other than to mention that you should avoid using these on areas covered with suntan lotion or other fatty moisturizers, so make sure that these go on before your lotions. When you're done with them you can put them back on the plastic backing sheets and stuff them back in the box.

In theory, these are supposed to be reusable, and to an extent they are. In preparation for a tattoo that was going to leave me unable to wear a bra for a week, I picked these up to wear instead. I found that they stuck amazingly well right out of the box. I wore them for about 8 hours the first time, and the only issue I had was that I didn't realize how much my nipples would sweat on their own. I don't think any of the other reviews mentioned this, but it's something that struck me as odd until I realized "duh, these don't breathe at all when they're on." So if you wear them for extended periods of time you may also find beads of sweat in the hollow for the nipple. The next day I went to wear them again and they stayed on ok, but not fantastically. The day after that they weren't sticking all that great, so I decided to shower and clean them off. With no oil at all on my completely dry skin and pasties that had been cleaned with just cold water like the instruction sheet said, I found that if I pressed and held them in place long enough, they'd stay on their own for the most part. The day after that? They fell off before I could get my shirt on.

After some more thorough cleaning (still without soap), I was able to get them to stick to my skin again. Unfortunately it was more just kind of there, and came right off as soon as it was bumped. I think the big problem is the lint that got onto the back of my pasties, and I can't figure out how to get it off. They're still usable underneath something that will hold them on, so I've worn them with a lace bra, but otherwise they mostly sit in their box and taunt me. I'm sure that I could easily get some pasty adhesive pads or glue, but these are supposed to be self sustaining so I really shouldn't have to.
Experience
The very first time I used these, I was like, over the moon. I ranted and raved to everybody about how awesome they were. Then I used them the next day, and they were less awesome, but still pretty great. And with a few more uses I find I have a hard time getting them to stay without a lot of effort. They're a great idea in theory, but I just can't seem to warm up to them as a reusable pasty option. They pair well with something sheer that will also hold them on, but if I need my nipples to stay covered, I'm probably going to pick different pasties in the future.
This content is the opinion of the submitting contributor and is not endorsed by EdenFantasys.com

Reviewed by Jul!a (Eden Writer) To the critics who despise us, go ahead and criticize us. It's your tyranny that drives us, adding fire to the flame.
Rank
7.5
wrote 560 reviews
Comments
Make a post
Forum
No discussions yet.
Thank you for viewing Lolos Lili – pasties review page!
Top