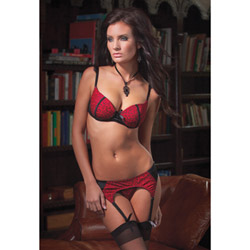 Bra and panty set
by Coquette

I Guess Leopards Have Small Breasts

If your smaller-than-D-cups want a lift, try this red leopard set. With ruffles and bows, it's feminine. However, it's definitely not intended for anyone larger than a C-cup, requires hand washing and the G-strings is just cheap.
Pros:
Cute, bra adds lift, comfortable and adjustable garter belt, feminine
Cons:
Small cups, small/cheap G-string, bra noticeable under clothes, can't fully adjust straps, hand wash
Rating by reviewer:
4
extremely useful review
This set consists of a bra, G-string and garter belt in red leopard print with black ruffle detail. This was my first 3-piece set and, while it definitely had is strengths, it's not going to work for everyone. Sizing will definitely be an issue. After recently sending a pair of Coquette panties back for being too large, I opted for the size large in this. It can be tricky to purchase multiple pieces in one size set.

I wear a 38C and the bra band fit almost perfectly. On the loosest hook, it was snug but not restricting, offering support. The cups were a slightly case however. There's a low demi-cut with foam padding that pushes up the breasts. I have nothing against this, but this set is definitely intended for middle-of-the-roads chest. My C-cups were sometimes spilling out in this. It would never work for anyone with a D-cup. I would say B or C cups only.

With that said, the bra has supportive underwire but the cups are only padded and not molded. They do not curve out like a VS bra. Because of this, the underwire doesn't curve back toward my body when I wear this bra. It's not necessarily a deal-breaker but it's something consumers should know.

There are black ruffles on the straps of the bra. While the bra is adjustable, these ruffles can get in the way if you want to pull the adjuster up further toward the top of the shoulder. I don't actually foresee this being a problem. If you shortened the straps too much, you'll be choking on your boobs with the tiny push-up cups.

There's also a black border stitched vertically through the cups. It looks nice by itself, as does the bra, but it's super noticeable under a cotton t-shirt. It kind of looks like an oddly placed nipple and the spillage of my breasts is more noticeable under a t-shirt.

The garter belt of this set is only the second I own. I uses the same black and red leopard print and it fastens at the back with bra hooks. There's several rows of hooks so it can be worn tighter or looser. I haven't had a garter belt like this style before, but it's nice. At the loosest, it fits comfortably on my 41" hips, but I could probably wear it tighter. It measures about 20" flat, on the widest hooks.

There are four straps total. The can be adjusted between 4.5" and 7.5" so this set might not be perfect for really tall users. The garters have black tab grips at the end and there are small pieces of ribbon attached to hide these. I personally find the ribbons to be more distracting than if they weren't there.

The G-string is my least favorite piece in this set. It's a little snug with my well-endowed ass and it's a Y-cut in back, not a T-cut, and is supposed to curve up over the cheeks. It simply cuts into mine. However, I could hide this by wearing the garter belt over it, so it's a toss up.

The entire set it intended to be washed by hand. I tossed the G-string into the washer and it did okay. It came out with a couple frays. The garter belt looks surprisingly well-sewn. I would imagine it would be fine in the wash. Ideally, I'll be acquiring a lingerie bag for washing it.

This set did come on a plush lingerie hanger with clips on the bottom. I stole it for use with my other babydolls, however. The straighter design works really well for hanging stuff over it.
This product was provided at a discounted price in exchange for an unbiased review. This review is in compliance with the FTC guidelines.