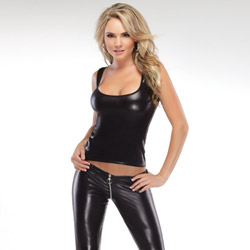 Not as sexy as I hoped

This shirt was an utter disappointment. It rides up, it's hot and icky, the straps are set too wide, and it is generally uncomfortable.
Pros:
It looks pretty on the package
Cons:
Everything.
Rating by reviewer:
1
extremely useful review
I will start by saying in theory this was a great shirt. It was going to be cute..but..

This thing is REALLY hot to wear long term! It gets sweaty and icky because the material doesn't breathe well! The shirt is shorter in length than it looks in the picture, and it rides up. The back ribbons don't stay in that sexy crossed pattern, they roll up and bunch up and look ridiculous!

Of course as per usual I am a cross dressing boy, but I like to state that for anyone who doesn't read my reviews religiously.

The material is the typical wetlook material. It is comfortable and stretchy but after a while it gets hot and sweaty.

The design was great in theory. The quality of it isn't so horrible as far as the sewing goes. It has no strings hanging off and hasn't torn or stretched out badly since I have worn it. It does do the earlier mentioned problems though. I think that is a flaw in the design. A wet look top probably shouldn't have this cut to it. The metal loops are well sewn and are very sturdy on the back, the ribbon isn't so sturdy but shouldn't be a problem because you should not be putting a lot of stress on them in theory.

This is hard to get into and out of without help. Easiest way to get in and out is to have someone lace it after you've slid into the front of it. It will not easily go over your head and is hard to adjust if you put it on that way loosely and then try to tighten it after. I had to have so much help from my girlfriend to get this on and off that it was a big hassle.

I would recommend hand washing and take the ribbons out before doing so. This should never be put in a drier because the wetlook can fry due to the spandex in it.

This came on a hanger wrapped in a clear plastic protector. The typical "Coquette" hanger came with it.It's not discreet but doesn't need to be because this isn't really an object that screams "sex" so much as it does "clubwear"
Experience
I think part of the problem is the straps for this are set so far apart that they sit almost under the armpit. I think it's a design flaw in the shape of the shirt that should not be something to use wetlook for. It rolls up too easy and rides in the back and the lacing for the ribbons just gets caught on each other and doesn't cross all pretty like in the picture. This was the most disappointing piece of lingerie I've gotten from EdenFantasys. I don't think I'll ever pull it out for a second round.
This product was provided free of charge to the reviewer. This review is in compliance with the FTC guidelines.

Reviewed by just a sub (Eden Advanced reviewer) everything is better in subspace!!
Rank
5.2
wrote 8 reviews
This review was edited by
Comments
Make a post
Forum
No discussions yet.
Thank you for viewing Wetlook tank top – camisole review page!
Top