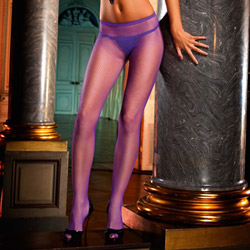 These pantyhose aren't going to be a permanent fixture in your collection, but they will be around for a while. They lack a reinforced toe and a control top style top, but the netting is very accommodating. The biggest drawback is the waistband, because it's nowhere near as accommodating as the netting is.
Pros:
Netting is stretchy and accommodating, Doesn't immediately sag if you don't fill it out
Cons:
Waistband is very small, Aren't going to last for a super long time
Rating by reviewer:
3
extremely useful review
What are these, and what are the basics about them?

These are colored fishnet tights. They're really basic in design and probably won't last a long time, but they're cute and soft and pretty comfortable.

Cool, what's the packaging look like? What's it made of, and how do I care for it?

These, like pretty much everything else from Baci seems to, came in an envelope type deal inside some plastic around some more cardboard. The front and back of the box show a model wearing the tights, and also has sizing, care, and material information. These are 100% Nylon and should be hand washed in cold water and line dried. Given how easily they seem to tangle I'd avoid the washing machine unless you had a small lingerie bag to keep them in, but run it through the washer at your own risk.

These are listed as a one size item, which to Baci means you should be a size 2-14, with a 24-32" waist, 34-40" hips, a 35" inseam, and weigh between 90-160 pounds. I'm about a size 6, I have a 29" waist, I'm about 34 1/2" around the top of my hips and about 38 1/2" around the largest part of my hips. I have about a 29" inseam and I weigh about 125. It seemed like no matter where I put the waistband it dug in at least a little bit, although the rest of the piece seemed extremely loose in comparison. In reality, I would call it more like comfortably loose. The widest part of my thighs are about 22" around and there was definitely room for a much larger thigh.

These are pretty much as basic as you can get. There's no reinforced toe and there's no control top to them at all, just plain purple fishnet the whole way up. They are pretty stretchy and could easily accommodate the upper end of the sizing chart except for the waistband. That's going to be your big limiting factor, as barring any modifications you do yourself you're pretty limited in the sizing. You can try bringing it up higher to sit on your natural waist, but this isn't advised if you have a belly button piercing at all, since the netting in the top will catch on those very easily. In the pictures below, it's sitting at about 31 1/2" around and you can see that it still digs in visually there.

They were otherwise comfortable to wear. Smaller folks will be happy to hear that even though there's a lot of give in general you won't end up with a lot of saggy netting, although if you're wearing them all day long they'll probably stretch out a bit and you'll end up with some sagging by the end of the day.

Ok then. What about the quality?

I don't see them lasting a terribly long time. They snagged on my wedding ring, which doesn't have a lot to it. It's not completely smooth, but it doesn't really catch on things either. However, even though it snagged there doesn't appear to be any damage. This is definitely the kind of netting that will stretch out as you wear it, and when I took them off I ended up with a giant tangled mess that felt like it took forever to finally get straightened out enough to be able to wear again. For the price though, you can't really complain too much.

But of course! Here you can see the toes, and a shot of where the waistband sat.

Experience
Everything but the waistband is super awesome. Well, ok, it could use a control top type thing, but even that's pretty neat. The waistband though, well that could use some work. It is super stretchy, but it doesn't look very flattering at all, and pulling it up to where it doesn't dig in a lot visually ends up with it catching on belly button rings. I do feel like for the price though, there isn't much room to complain really. I mean I wouldn't pay $10 for pantyhose like these, but for 3 bucks I don't mind if I have to replace them after a few wears.
This content is the opinion of the submitting contributor and is not endorsed by EdenFantasys.com

Reviewed by Jul!a (Eden Writer) To the critics who despise us, go ahead and criticize us. It's your tyranny that drives us, adding fire to the flame.
Rank
7.5
wrote 560 reviews
Comments
Make a post
Forum
No discussions yet.
Thank you for viewing Baci fishnet pantyhose review page!
Top