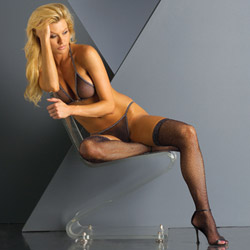 These thigh high fishnets are a great buy and seem very sturdy. Though garters would help for longer or more rigorous play or a night out dancing (as I purchased them for), I think these would be fine for most play. The sparkles on these make them a unique product. If you like things that shine, you'll love these!
Pros
Sparkles, well-made, perfect for a night in
Cons
Garters suggested for a night out or extended wear
Rating by reviewer:
4
useful review
Ah, fishnets! Something about them just screams, "Sex me up now!" Of course, the glitter in the nylon thread adds a nice touch, and I'm very fond of things that sparkle, as noted in another of my lingerie reviews. I bought these thigh-highs with the idea of maybe wearing them for for swing dancing. It turns out that they are a bit too dark to look right with my equally black polka-dot dress, but they are still a very sturdy pair of thigh highs. I haven't tried them dancing yet, but I have no doubt they'll hold up after my first couple uses and washes. With that said, I think they'd hold up to a night of dancing and twirling with the help of some garters. Those will be next on my wish list for sure.

The fishnets feel scratchy at first touch, and very bumpy because of the glitter bits in the thread. Once you put them on, though they feel smoother. They aren't scratchy at all when you are wearing them. They definitely feel like thick tights, though. The glitter in them is threads woven into the black fishnet threads, so there's no glitter powder to rub off on your legs. I'm guessing the glitter could come out or fray in theory, but so far they seem to be very well-made indeed.

I think these are sturdier than the other pair I tried based on how thick the thread is that make up the fishnets. They also stretch well, and have good elasticity even after washing in a lingerie bag with the rest of my darks. I don't do much in the way of special care other than the lingerie bag. I just don't have the time or money for the water bill to do small loads of "gentle" cycle on a consistent basis.

I slipped these thigh highs on with the chemise I reviewed before (link previously mentioned). My husband LOVES to see me in black and he especially liked the addition of the sparkly fishnets. Of course, they didn't stay on very long....
Follow-up commentary   I still like it 3 months after original review
I haven't worn these much to be honest, but that has more to do with the fact that I don't wear much lingerie at all. These are still a solid choice for thigh high stockings, it's a crying shame that they are discontinued. :(
This content is the opinion of the submitting contributor and is not endorsed by EdenFantasys.com