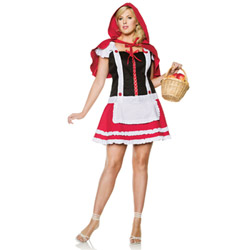 Costume
by Seven 'til Midnight

To Grandmother's House We Go

Seven 'Til Midnight claims that it's where the fun begins, however this dress didn't exactly make me feel that way. Having a few quality issues and some mixed messages on the packaging, the manufacture may have dropped the ball a bit. It's not all bad though, there are for sure some redeeming features to the set. It's unique, not overly sexy, and would work great for role play, costume parties or even Halloween.
Pros:
~Can Be Worn in Public
~True to Size
~Comes in Plus Sizes
~Unique
Cons:
~Some May Find Lace Opening Revealing
~Doesn't Come in Standard Sizes
~Quality Issues
~Shoulders
Rating by reviewer:
3
extremely useful review
~Material/Design/Craftsmanship
The very first thing I noticed when I pulled this costume out was the plentiful amount of detached strings. The next thing I noticed was how hard it was to get the zipper to work, I struggled with it for so long I worried that I would have to send it back. I eventually got the zipper to open thankfully. While the quality isn't terrible and I'm not afraid of it falling apart, it's not outstanding either. This two piece set by Seven 'Til Midnight contains a Red Riding Hood dress and a cape. It could work great for a costume party/Halloween or even as a sexy role play. The tag inside costume says it's made up of 95% cotton and 5% spandex. However, the packaging states that it's 98.5% cotton and 1.5% spandex so I'd have to say it's a toss up between the two. The fabric feels a bit ridged but isn't rough or itchy. This costume was made in China. 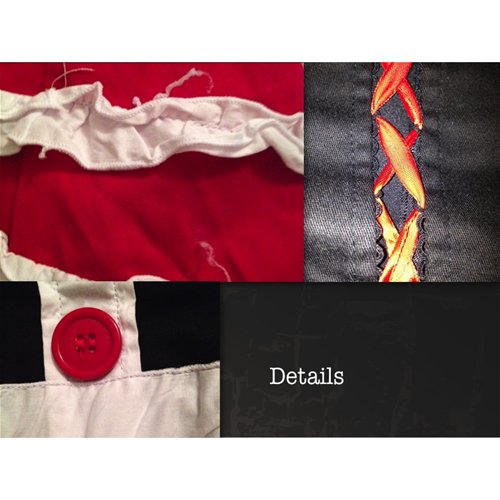 ~The Dress
The dress has two main parts, the top and the bottom. The top is made up of two black fabrics, the front has a black cotton and the back has a black spandex type material. The costume zips up down the center of the back.
Down the center of the front, there is a large split that laces up with red ribbon. This means that you can either tight-lace it to look like it's just ribbon detail or you can expose a few inches of your cleavage and stomach, whichever you are comfortable with. Personally I attempted to tight-lace this, though you can still see bits of my skin if you look closely. There are two sewn on suspender like white pieces of fabric that lie about 3 inches from either side of the lacing. These pieces continue up to the straps and around to the back of the dress. The shoulder straps are about two inches wide with white frill detail. There are 8 one inch wide red buttons on the dress. Two where the straps meet the dress and two right above where the white suspenders meet the "apron", the other four are similarly positioned on the back of the dress.
This dress has a sweetheart type neck line and no built in breast support. It looks perfectly normal with a a bra on though, so no worries there.

Separating the top and bottom halves of the dress is an attached apron. It's about a foot wide and the top is sewn into the dress. There are strings that you can use to make the dress a bit tighter around the bottom, but they don't effect the apron at all.
The bottom of the dress is made out of red fabric and has two white ruffled stripes towards the bottom made from the same white material on the top. The skirt isn't big and could be worn with or without a petticoat. 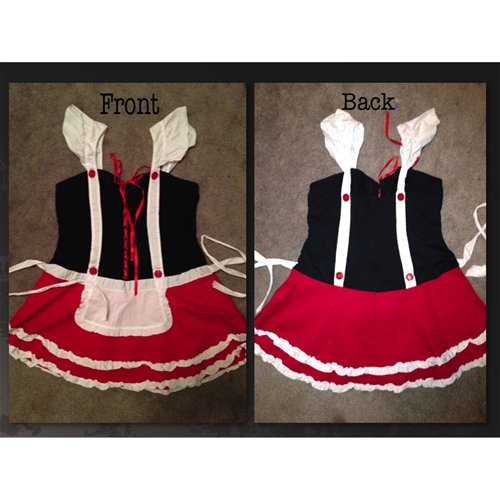 ~The Cape
The cape is for sure one of the cutest aspects of the set. It's made of the same red cotton material that is featured on the skirt portion of the dress. There is a little baby tag on the inside of the cape with a large "X" on it, leading me to believe that this is a larger size. Which is great because some companies forget that plus sized costumes can need plus sized accessories. The cape works great as a small coverup. 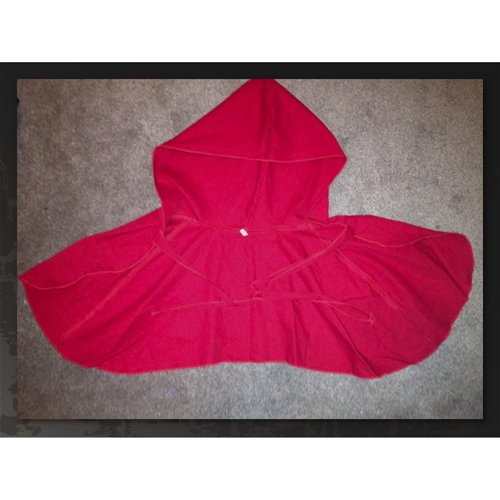 ~Packaging and Care
This outfit comes in the same type of plastic bag that many other Halloween costumes come in, however the back of the bag is a see-through pink. There is a cardboard slip on the inside with pictures of the front and back of the dress. It also states the company name, slogan, pieces included and some care info. Another flub, the packaging says that the set should be hand washed separately, while the tag say's the dress is machine washable. Thankfully both agree that the set shouldn't be bleached. I would say that if you don't mind risking the white it would be safe to machine wash. If you do, stick to hand washing it. Personally I would hang dry this either way due to it being mostly cotton hand having great shrink potential. 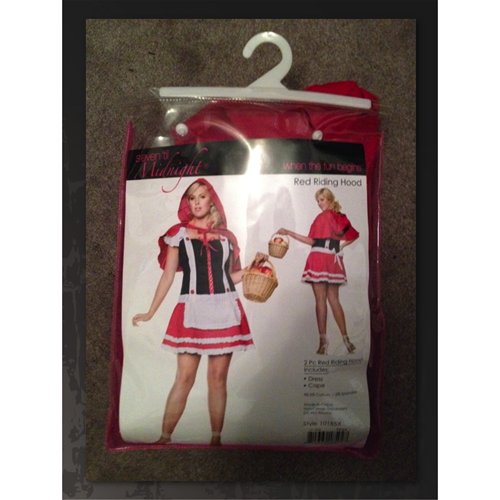 Experience
~Sizing
I think this set is pretty spot on size wise. Seven 'Til Midnight's 1X/2X measurements are as follows in inches (mine in parentheses)

As you can see in the pictures this costume was pretty big on me, especially in the waist. This is most likely due to the fact I'm at the bottom of the measurement spectrum and have an hourglass figure.
It's not really adjustable unless you want to count the lace up portion and the ties along the side of the apron. Although both do help in altering the appearance, if you're around my size or smaller you're not going to get the costume much tighter without sewing. Which really is a drawback considering Eden currently only carries sizes 1X/2X and 3X/4X.
On the other hand, I think that this costume will fit the highest measurements listed and look great. I don't think that the skirt is too short or revealing. I'm around 5 foot 6 inches and it covered me just fine even bending down.

~ Overall
Being that this is my first Seven 'Til Midnight purchase, I can't say that I'm very impressed. First with the questionable quality, then with the packaging/tag blunders. I feel like those are little mistakes that should have been spotted. I also didn't agree with some of the designs as well. I thought the shoulders could've been a lot better, to me they just look like silly wings. I also would've been fine with a detached apron.
I can't say that it's a terrible costume at all. The design was unique and different from many of the other costumes I've seen out recently for the same character. Also, this costume has the potential to be either sexy or conservative, giving it multiple uses. I liked the overall concept but I don't think it was executed as well as it could've been.
As for the costume on me, I feel like it wasn't exactly flattering. But that possibly could have been solved with a smaller size so I can't knock it down for that.
For those reasons I'm giving the set a 3 out of 5. I'd recommend it to a woman of any shape whom fits within the size chart if they don't mind the few issues I have mentioned. I feel like this could work very well for another person but sadly I don't think it worked very well for me. 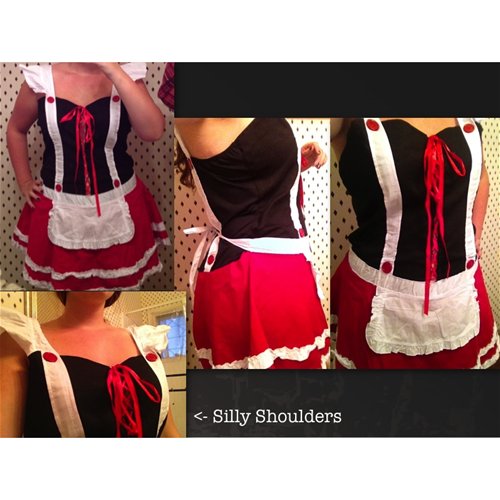 Follow-up commentary   I don't like it anymore 13 months after original review
The more I tried this costume on and attempted to make it work for me the less I liked it. The shoulders still look ridiculous no matter how I wear them. Plus the material is such that I wouldn't feel confident that it would look any better if I attempted to hem the dress or try to take shoulders off. As stated in my initial review, it just doesn't work for my body type, especially in the waist area. I'm sure it could work for a woman with a more rectangular or apple build who would appreciate a little extra room in the waist area.
For that reason I won't bump my initial rating too far down but I will put it at a 2 out of 5 stars.I'll most likely end up selling or giving the costume away because sadly it's collecting dust. I just wished it looked as cute on me as it did the model.
This product was provided free of charge to the reviewer. This review is in compliance with the FTC guidelines.

Reviewed by LovesAPoet (Eden Advanced reviewer) "If I was a flower growing wild and free, All I'd want is you to be my sweet honey bee."
Rank
5.5
wrote 19 reviews
Comments
Make a post
Forum
No discussions yet.
Thank you for viewing Red riding hood – costume review page!
Top