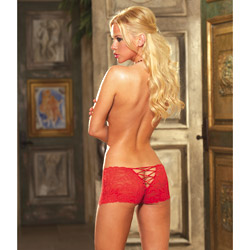 What? My Vagina Likes To Breathe Too You Know

These crotchless panties are definitely a great investment if you're looking for something sans crotch. They're comfortable to wear and should fit everybody they say they will, and not get in the way at all during any kind of sex.
Pros:
Comfortable, Sexy, Stretchy, Should fit size guidelines
Cons:
Loose threads, Might not cover lips
Rating by reviewer:
5
extremely useful review
The packaging for these was pretty nice. A little cardboard package about 6" square with these in a little plastic bag inside. On the front and back you can see a picture of the model wearing them, as well as get the sizing guidelines, and some care instructions. Aside from the "guidelines" you can find all the rest of the relevant information on a tag on the back of the panties. You should hand wash these in cold water and line dry, but you'd be ok with a lingerie bag in cold water on a gentle cycle too. They're also 90% Nylon and 10% Spandex and made in China.

The design is pretty simple, like a pair of boyshorts that have a big ol' hole in the crotch area. They're a really soft floral lace that are nice to feel in the hands and on the butt. In the front there's a 3 1/2" seam where the two halves meet and is decorated with a few tiny red bows. From there the crotch opens up with two lace lip covers and then end in the back with another 3/4" of a seam and then opens up to some cords strung like a little corset. The cords and the lace are both stretchy, so this should be fit everybody it claims to with relative ease. Because there are no defined edges, you're not likely to end up with anything digging in.

Now in theory the sides of the crotchless part are supposed to sit on your vagina lips and be out of the way. On me when I first put them on, they just went to the side right away. This granted really easy access, but also put my vagina completely on display. Not the end of the world, but it took me a while to stop picturing my vagina as the vagina that the lady got tattooed to look like a monkey. What, you've never seen that picture? I know it's strange, but that's the first thing I thought of. I couldn't get them to sit on my lips, but it wasn't a big deal either because they stayed out of the way during sex pretty well. They got lube on them, but that was about it. It was easy to access everything from multiple positions, so these should work well for vaginal or anal sex. They sat right about on my hips, and covered a good chunk of my butt. I did have some ass cleavage, but I wasn't overly exposed.

Aside from a few loose threads, the craftsmanship on these is pretty decent. I can see one spot in the back of mine where it's already starting to come apart, but I was easily able to tie the loose threads back together. So these aren't going to be a forever item, but they're cheap enough to replace once or twice a year if need be.
Experience
As compared to Dreamgirl's other crotchless panties, these are a definite improvement. Different design, different feel, different fit, and they're just pretty awesome. The loose threads are the only down side I can see to these, and I'm torn on a rating because of that. On the one hand I don't think these were designed to only be bought once, and it wasn't that hard to fix what I found. On the other hand, had I not fixed it they would have come apart. I'll give it to the fact that they're cheap enough to repurchase a few times a year and bump it up to 5, because I really can't think of anything else wrong with these, other than the lip covers might not cover all vagina lips.
This content is the opinion of the submitting contributor and is not endorsed by EdenFantasys.com

Reviewed by Jul!a (Eden Writer) To the critics who despise us, go ahead and criticize us. It's your tyranny that drives us, adding fire to the flame.
Rank
7.5
wrote 560 reviews
Comments
Make a post
Forum
No discussions yet.
Thank you for viewing Stretch lace open crotch short – crotchless panty review page!
Top