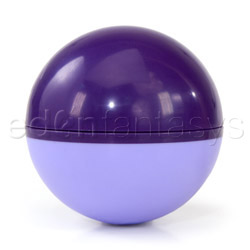 A ball of fun!

Though I was unable to orgasm using just the pleasure ball, when used in conjunction with another, more pinpoint vibe such as a bullet, it makes clitoral orgasms much more satisfying.
Pros:
Unique shape, water proof, reasonably priced.
Cons:
Vibrations may not be strong enough for some.
Rating by reviewer:
4
useful review

The pleasure ball piqued my interest months before I actually gave in and purchased it. After popping in the three AA batteries and screwing it back together, I pressed the little round button to turn it on. My entire hand began to shake from the low, thrumming vibrations, pressing the button again accelerates the vibrations slightly, and again when pressed a third time (pressing the button a fourth time turns the toy off.) The vibrations through all three speeds are very thrumming instead of sharp, they are not pinpoint at all, but instead very diffused, which made me immediately question my decision as I typically prefer very localized, pinpoint vibrations. not one to immediately give up on a toy, I climbed into bed with my ball, turned it on and placed it on my clit... no fireworks, even when I cycled through all of the speeds. Fifteen minutes later and just wound up enough to be frustrated, I reached over and grabbed my trusty bullet and placed it on my clit, turning it on. Somehow, during this process, I dropped the still running ball between my legs and onto the mattress, where it rested against my labia, completely changing the sensations. Reaching down, I pressed the button, changing it to the middle speed which feels, to me, the most deep and thrumming of the three, then squeezed my thighs tightly around the ball, holding it in place with my legs and grinding it hard against my labia, leaving the bullet focused on my clit. The deep vibrations of the ball traveled through my pussy as well as my thighs, resulting in an orgasm that, while still a clitoral orgasm, was more fulfilling than just using a pinpoint vibe on my clitoris.

This lovely little ball is a combination of hard plastic (in this case, the dark purple side) and TPR (the lavender side.) It has virtually no smell, even when first opened, nor does it have a taste. The texture of the toy is quite smooth, with the exception of the seam where the toy unscrews to pop in the batteries, however, this seam is rounded inward slightly so as not to slice delicate skin.

The shape of this toy is what caught my eye initially- I had never seen a vibrating ball of this size and I just had to have it. The ball is 3 1/4 inches in diameter which is substantial enough to keep a good hold on, whether using your hand or holding it in place with your thighs as I did. The design is very discreet in appearance- no one would be the wiser upon seeing this on a nightstand. Due to the relatively compact size of this toy, coupled with the fact it has no external wiring or knobs, it is perfect for tossing into a suitcase or overnight back to take with you on a trip.

This toy worked horribly for clitoral stimulation for me, however, I fell in love with it when I nestled it between my thighs. The ball is not very loud- it can definitely be heard by someone in the same room, though I doubt it can be heard through walls unless they are particularly thin and the person listening has outstanding hearing. The controls could not be easier to use- one simple button turns the toy on, cycles through the three speeds and turns it off. The vibrations are diffused throughout the entire toy, so there is no wrong way to hold it. I did not take this toy with me in the shower or bath, for me it's just not the kind of toy I would grab for water play, however, it holds up perfectly fine when being washed under running water, no condensation or leaking inside of the battery compartment.

The pleasure ball it quite easy to take care of- I wash it with soap and warm water, let it air dry and toss it into the drawer. Since the toy is not inserted, I do not use lubricant with it, though you could certainly use a water based lube with it if you so desired.
This content is the opinion of the submitting contributor and is not endorsed by EdenFantasys.com