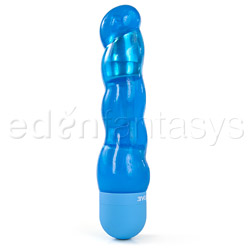 Amore is made of TPR, which is good news for those concerned about potentially harmful phthalates, but bad news for those that are sharing toys or sticking them up bums. TPR, unlike silicone, is porous, and therefore can house dangerous bacteria. This makes it a bit tricky to keep clean. So if you plan using this toy on anyone besides yourself, or on going anywhere near an anus, use it with a condom.

Though TPR has a plastic, synthetic smell, we didn't find it to be strong or off-putting. In fact, after giving it a good first wash out of the package, the smell was virtually unnoticeable.

TPR is soft and very beginner friendly, and it conducts vibrations extremely well. TPR's only downfall, due to its gummy-like finish, is that it attracts particles of dust and hair like fly-paper in grandma's pantry. Do yourself a favor, and keep some toy-safe wipes on hand.

Amore is designed for those who love medium-thick nubby toys. My wife and I found it felt great when used externally, drawn over and held firmly against the entire vulva. From here the gentle curves were effective and not too abrupt. When used internally, however, we found found that it felt a bit too unnatural, being fashioned out of chubby bumps and not smooth like skin. Due to this unique shape, Amore is probably not ideal for beginners who aren't looking to experiment with texture and girth. But combined with strong vibration, Amore's size and shape will definitely be a hit on anyone with a sense of adventure.

Vibration is the clear strong point here. Amore has three settings, and I've made up names for each: warm-up, cruising speed, and terminal velocity. OK, so maybe I'm exaggerating slightly here. There are more powerful vibrators out there. But for the dual AA's required to juice-up Amore's jiggle, it gets a lot of bang for it's buck. Please pardon the cliche.

Another feature I loveand the push button controls. How many of you have struggled with hard to turn, lube-riddled turn dials? Well fret no more, my friends. Amore's controls are simple and easy to use. Psst. Amore is also waterproof.

And now for one of only a few weaknesses: the noise. On the second and third settings, Amore can sure buzz. It won't rattle any doors or anything, but it might announce itself to the neighbors, flatmates, or kids if you have them.

TPR can be cleaned with toy cleansers, or soap and water. It cannot, however, be boiled or bleached, so take note. It is also safe to use with both silicone and water based lubricants.

Try storing Amore in a cool, dry place with similar toys, or, since it comes in an elaborate metal box complete with metal clasps (see image), you could house it safely there.

Our first impressions of Amore were mixed. While the packaging and overall design of the toy impressed us, and the vibrations, though a bit noisy, was also enticing; we found the TPR material to be our only initial turn off. My wife and I are used to using silicone toys. We love the smooth, clean finish and safety typical of said material. But the TPR reminded us of cheap dollar toys and bouncy-balls sold in grocery store lobbies. To be fair, though, TPR was far from the worst material we've ever encountered. It has vast advantages over jellies and rubbers, but not as many as silicone. We found it exceeded our first, skeptical expectations. But it did not wow us.
Follow-up commentary   I've started to like it more 1 month after original review
The last time we used Amore, we discovered an all new method of using it. We discovered that it sends waves of stimulation, on both women and men, when drawn along the inside of the thighs, on the breasts, and perineum. As you can imagine, this caused near fits of anticipation that night.
This product was provided free of charge to the reviewer. This review is in compliance with the FTC guidelines.