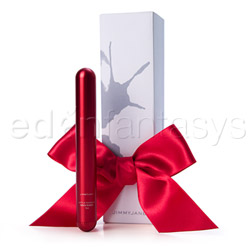 The Little Chroma is a reliable and durable clitoral vibe that you can take in a shower. Some may find the lack of intensity controls and a simple on/off switch frustrating, but there's no need to worry about accidental control-mashing at the wrong moment. Very eco-friendly when used with rechargeable batteries, the replaceable motor means this toy will last you for years with proper care. The design is sleek and sexy and would make an impressive gift for the special lady in your life.
Pros
Uncomplicated, durable, eco-friendly, replaceable motor.
Cons
No vibration controls, no way to shut toy off without breaking waterproof seal.
Rating by reviewer:
4
extremely useful review

The Little Chroma is probably best used as a clitoral vibe, though it can be inserted. There is a place on the cap where you can thread a retrieval cord in case you want to stick it somewhere you might lose it, but I wouldn't recommend this toy for anal insertion for safety's sake. This could be a great partner toy because it's neither threatening nor complicated. There are no controls to mess up, you can fit it between your bodies, and it's not lifelike. At 5 and 1/4 inches long and just over a half inch in diameter, it resembles a long finger more than an erect penis, so it is unlikely to make a male jealous in the size department. It can be used for insertion, though it is unlike to fill you up. I can hit my g-spot with it, but it's definitely not made for g-spot stimulation.

I think the best possible use for this toy would be a gift for a couple that is a little nervous about sex toys. It's not an intimidating toy, but it vibrates well, is solidly built, and great for partner play. Its noise level is also amazing. It is noisy while turning it on and off, but once it's there, it's astoundingly quiet. If you share a sleeping space with a roommate in a dorm, it would be a great toy to take in the shower without arousing suspicion. You wouldn't want to turn it on in the middle of the night in a quiet room, but if there was some white noise in the room (a fan, music, etc.) or if you could leave the room to turn it on and off, you could probably use it in a shared sleeping space without arousing suspicion (if you can keep yourself quiet!).

The Little Chroma is made of anodized aluminum. It is super smooth, with hardly any friction. If you use it for vaginal penetration, the slickness and size are likely to eliminate the need for lube. The metal is also cool to the touch, which is great for brief sensation play, but it warms up pretty quickly when it's next to your body. The entire thing seems to be very solidly made, unlike a lot of toys that you can tell are going to burn out quickly on you. As long as you take care of it and don't mind buying a replacement motor, this toy could last you many years.

I appreciate the simplistic design and was drawn to the eco-friendly aspect of the toy. I love that I can easily replace the motor myself and that it promises to last me years and years. I planned to use rechargeable batteries in the toy, but I quickly noticed that not all AA batteries fit inside this toy! In an effort to make it super quiet, they left no extra space in the battery compartment, so you may find that some brands of AAs don't work for you. Duracell batteries fit with no trouble, but I found that my Energizer rechargeable batteries are inconsistent in size (some fit, some don't). Another brand of rechargeables didn't fit at all. The Jimmyjane website recommends Sanyo Eneloop rechargeable batteries, so presumably those will fit comfortably if you're looking to buy a pack of rechargeables to use with your Little Chroma.

In battery power, this toy reminds me of my first vibrators, the $10 plastic slimline models that use only one AA battery, in that the power of the vibration is directly proportional to the life of the battery. Use a fresh battery and the toy may be too powerful for you. Use a battery that's almost dead and the vibrations will be weaker. Fortunately, I find that batteries with less power provide the sensations I like the most, but most women are going to want to turn UP the power of their toy during a session instead of having it diminish the longer she uses a toy. I recommend always keeping fresh batteries on hand, just in case. Jimmyjane points out that the vibrations are most powerful in the tip and become less intense as you move down the toy, so you can use different areas of the toy on your clit depending on what you need. I like this idea in theory, but it might prove too complicated if you're trying to use it during PIV (penis in vagina) sex with a partner.

The controls are as easy as can be to use or explain to a partner, because it's only on and off. Screw the cap on all the way and it's waterproof and silent enough to be used just about anywhere. Screw the cap off, and you can slip out the battery for traveling discretely. The problem lies in between, where the vibrations are very noisy and the toy is not waterproof. If you're going to use it in the shower, you'll either have to dry off your hands and vibe before you turn it on and off, or you'll want to keep a soft place to drop it while it's still vibrating until you can get everything dry enough to turn it off. If you're in the middle of a sex act, you may end up just dropping the toy on the bed until you're done with the act instead of turning it off properly, because it does take a few twists (5-6 for me) to screw the cap on/off completely. I've used it in the shower several times with no problems, but I haven't tried completely submerging it. I expect that it will work fine, but you'll want to make sure the cap is screwed on tightly and that you don't mess with the cap until the toy and your hands are dried off.
The vibrations are in the tip, so you can vary the intensity by using different parts of the toy on the part to be stimulated.

I would keep it in a soft container without other hard objects to bump into it. I'm partial to a pretty, unmatched sock in the bedside stand. Washing it is super easy; screw the cap on all the way, use mild soap and water, dry it off. I wouldn't suggest boiling this toy. It's not porous, so it won't be harboring any germs as long as you wash it. You can use silicone or water-based lubes with this toy. You'll probably want to store it with extra batteries. For traveling, you can take out the motor, which looks just like a AA battery, so there will be no worries about it turning on at the wrong times. Also, you can replace the motor if it burns out, so with proper care, this toy promises to last you a very long time.

The packaging was a cute, rectangular cardboard box with molded foam on the inside to keep the toy safe. Its shape would be easy to wrap, unlike most toys and their plastic, clam-shell packages. You won't need scissors to get at the toy. There also isn't a scantily clad porn star on the packaging or anything; it is extremely tasteful and would be an excellent gift for someone who might be a little intimidated by sex toys, because it doesn't look like a severed body part. If you leave this sitting on your bedside stand, it's going to attract far less attention than most other sex toys. It has a very classy look to it. You could use the box for storage if it was going to sit in your bedside stand, but it was clearly not intended to be a lasting container; it will get banged up after keeping it in your suitcase for awhile.

My instructions came only in English, but they were clear and well-written, with excellent information about putting it together, turning it on, cleaning and care, storage info, details on replacing the motor, safety, and warranty info. The warranty seems nice, but don't expect to be able to return it to Jimmyjane unless the toy is defective. They won't give you your money back on a used toy just because you don't like it.

A lot of vibrators can be too intense for me, and a fresh battery in this one can be a little much for me. When I'm feeling picky, I'm still going to reach for my favorite vibrator (Lelo Gigi). But this toy is great when you don't want to have to worry about bumping controls and you just want something that vibrates reliably and isn't going to break. I'll always love it as a shower toy, even if I have to dry it off to turn it on and off. It's my favorite vibe to have my partner use on me because the keypad on my Lelo toys always finds a way of getting bumped. I expect that this toy will be my "old faithful" backup vibe in my toy box for many years to come.
Follow-up commentary   I still like it 16 months after original review
I can't say much has changed for me with this toy. It is not my go-to vibrator because I prefer my Lelo vibes where the intensity can be adjusted with the push of a button. But if the rechargeable batteries on my other toys fail, it is great to have a toy that I can pull out and use as long as there is a fresh AA available. (It also doubles as a really useful tool to test how much juice is left in individual batteries.) I may go months at a time without using this vibe, but it becomes indispensable when I am traveling or looking for a little bit of vibration in the shower. I took it on a backpacking trip, and I was thrilled to not have to worry about breaking it or keeping track of chargers on my trip. It is tiny, portable, durable, and eco-friendly (if you keep rechargeable AA batteries around). If it only had a way to adjust the intensity, it would be absolutely perfect in my book.
This content is the opinion of the submitting contributor and is not endorsed by EdenFantasys.com