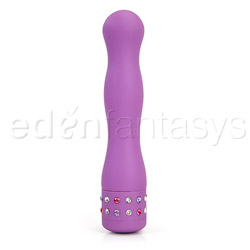 While this item and cute, affordable and easy to care for, I found that its vibrations were just too weak to get any kind of enjoyable experience from. While Groovies Wave will not excite people looking for something more intense, I would strongly recommend this as a great beginners toy. I give it 3 stars because it is a solid toy, but nothing really to write home to about.
Pros:
cute design, velvety texture, very affordable, easy to care for
Cons:
Weak vibrations, buzzy
Rating by reviewer:
3
extremely useful review

The Groovies Wave came as a freebie with another order, and it was just so soft and curvy that I was pretty excited to receive it. This cute vibe is rather small, making it a very convenient size for travel. I also found it a comfortable size for vaginal insertion when I just want something gentle.

I particularly enjoyed the shape and smooth texture during vaginal insertions. However, the point of a vibe is the vibrations and I found Groovies Wave disappointing. My clitoris did not react at all to any of the settings on this vibe, from weak to strong, from flutter to roller-coaster. I felt a bit of a vague tingle but I did not become turned on or even a bit excited. As far as the effects of the vibrations vaginally, I barely noticed them. With that being said this toy could definitely be used more as a tease for nipples, clit, and vaginal lips to provide just enough stimulation to peak interest. However, since this toy does lack any kind of handle or flared end I do not suggest inserting this anally since it could very easily get "lost".

Despite my ragging on the strength of the vibrations, I will say this, if you like gentler stimulation then Groovies Wave would be perfect for you. Or if you live in close quarters with others and need something to tease you into some excitement but don't want to let everyone know, this vibe's quiet buzz will also work great. If you're a bit paranoid, turn on some music, but unless someone is standing in the room with you, they won't hear a thing.

This toy is made of plastic, but a velvety soft plastic. It has the kind of texture you just want to pet and stroke and rub all over you because it is nice and soft. In some ways it reminds me of a kitten wearing a jeweled collar. This softness is noticeable when using the toy, as this vibe just smoothly slides on in and gently caresses your clit and vagina. It is not a "plush" toy because there is no give when you squeeze it. However, since it is rather slim and short, injury and discomfort due to firmness just doesn't happen.

As far as taste and smell, there really is none that I can detect. I practically stuck this vibe up my nose and still noticed no smell. Upon sticking it in my mouth, I tasted nothing as well and just noted that the smoothness of the toy felt nice on my tongue.

Overall the vibe is just 1" inch in diameter and 4 1/4" inches of insertable length, with about 1 inch for the battery cover. Said battery cover is bejeweled with pink, white, and purple rhinestones that add nothing to function and are all about looking pretty. Thankfully they are very small so handling is not uncomfortable. As far as aesthetic appeal, I will be totally honest, pink and purple don't really do it for me. I look at this and think its a bit prissy. Reminds me of those blinged out phone cases you can buy at those kiosks in the mall. To say the least, the Groovies Wave does not turn me on with its looks at all. Maybe if it came in a green color with blue sparkles, or vice versa, I might be a bit more interested.

Now to talk shape. The shape of this vibe is very pleasing when inserted. The Groovies Wave starts with a small rounded tip, slims down, widens up and slims down again, which unsurprisingly means that it looks wavy! The soft rise and fall of its curves led to a very gentle but subtle arousing sensation against my vaginal walls. These curves also lend themselves well to clit stimulation since they slide so nicely over everything.

When it comes to batteries, this toy proves to be very simple and user friendly. You simply screw off the sparkly battery cap and insert two AAA. The cap screws on and off very easily, and tightly which ensures that it is bath time safe.

Because of this toy's size, weak vibrations, and over all velvety qualities, I see this as being a good beginners toy. Since it is rather small, it would also travel well. However, there is no way to lock it in the off mode, so I would recommend taking the batteries out before throwing it in your suitcase or purse.

This vibe is operated by a smooth hard button on the bottom of the battery cap that clicks every time you press it. This button does not light up and it is the only control on the Groovies Wave. To get to any setting you need to click through until you find what you want. I found this really annoying because if I want to go from high to pulse, or low to flutter, I have to click through several settings and hope to god I don't miss the one I want, because if I do I have to click through all over again. Also you have to click through all the settings to turn the thing off. I would enjoy this better if it had dial instead of a button for vibe setting adjustment. Another feature I wish it had was an on and off switch, and a way to lock it into the off position to aid in travel discreetness.

During my first use of this toy I noticed how quiet Groovies Wave is. Now this toy is waterproof, so I did try it in the shower. While in the shower noticed that the water drowned out almost all the sound. When under a comforter you can still hear it, but just barely. And if you're using it behind closed doors, you wouldn't even need to put any music on. The only way someone will know you are using this vibe will be if you shout "Hey guys, I am stimulating myself with the Groovies Wave!!! Don't bother me right now!"

The vibrations themselves are rather weak. The vibes originate from the tip, which I was hoping would provide some intense clitoral stimulation, but it just made me feel vaguely tingly no matter what setting I used. When using the vibes during vaginal insertion, I hardly noticed anything different than when I used with with the vibes off. I think this is due to the buzzy nature of the vibes. My phone wiggles around more when I put it on vibrate than this vibrator does. At least the order the vibes go in does seem to make sense. The eight settings are in order: low, medium, high, roller coaster, long pulse, short pulse, intense, and cycle. The only one I enjoyed a bit was the short pulse because the rapid changes were as close to some kind of intensity as this toy gets.

So if you're looking for something that will rock out like a grunge head banger, look elsewhere. If you want a toy that feels like some very cuddly bumblebees, then this might be the perfect toy for you.

This product is plastic, semi-porous and sports an eight on the safety scale. It is latex free, hypoallergenic and Phthalates free. Cleaning should be done with hot water and anti-bacterial soap, any kind of toy cleaner, or isopropyl alcohol. However, you cannot boil this toy, so if you plan on sharing Groovies Wave use a condom.

Since this toy is plastic and not fragile at all storage is not something to cause worry. Throw it in a drawer, a toy box, a sexy satin bag. Thankfully Grrovies Vibe does not seem to collect lint at all, despite the fact that mine has traveled from from drawer to towel to bed to couch.

In the same way this toy is easy to clean and store, it is just as easy to lube on up. You can use any form of lube on this toy.

Groovies Wave comes in a basic blister plastic packaging. Dark blue paper provides a background for your new toy, and its vibrations, battery requirements and the fact that it is water proof are all proudly displayed. The package was easy to open, but not so easy as to make me wonder if it could have been open before I go it. Because of the way it is wrapped, I don't really see using the packaging for storage later. Then again I just tend to tear and cut to get to my toys as fast as possible, so perhaps the more calm and gentle people out there could come up with a way to reuse the packaging.

I think the toy would look fine enough to give in the packaging, but I would still suggest putting it in a pretty bag or wrapping it in nice paper.

The packaging is not a glamorous as Fleur De Lis, but it is definitely better than just a brown paper bag.