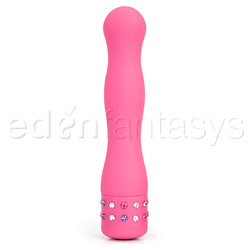 The Groovies Wave is a great beginner's vibe. It is very cute for those who want something less intimidating for a first buy.
Pros
Discreet, small, great beginner's vibe, very cute, easy to travel with.
Cons
Battery cap can come loose and make noise.
Rating by reviewer:
4
extremely useful review

My favorite way to use this toy is for couple's play during sex. Its small size enables it to be used in a wide variety of positions (anything from behind is perfect, doggy-style, bending over a bed or desk . . . all of them are great to use with this toy). The vibrations are strong enough for my partner to get a nice jolt from it as well. Solo play with this toy is just as nice; it’s long enough for it to be inserted and gives nice, direct stimulation to the G-Spot. Don’t stick to just pussy play with this toy though. It feels fantastic on any part of the body. You can use it as a teaser on nipples, lips, ears, the neck -- wherever strikes your fancy.

The Groovies Wave is made of a hard pink plastic. This toy is non-porous, phthalate-free, and latex-free, as well as being waterproof. The plastic is very firm; it has absolutely no give, but it can seem quite a bit softer than it actually is because of the luscious texture of the plastic. The surface of the toy is velvety to the touch and very pleasant on any part of the body. Everyone, from beginner toy users to toy veterans, will enjoy the feel and texture of this toy. The Wave has no unpleasant smell and little to no taste.

This vibe is relatively small: about five-and-a-half inches long (four inches insertable) and a little more than one inch in diameter. I can lay this vibe in the palm of my hand and it doesn’t quite reach from the heel of my hand to my fingertips -- and I have pretty small hands. It’s just the right size for stowing in inconspicuous places (either for travel or storage), and it's lightweight, to boot. This is my go-to toy for trips out of town at the moment.

The controls on the Wave are incredibly simple. It has one little black button on the end of the battery cap that cycles through its eight vibrating functions. Some of the functions include different intensities of vibrations: a rollercoaster function, a pulsing function, and one function that cycles through all of the other functions. The cycling function claims to be “random,” but it really just goes through the other seven functions in order. Even if it’s not random, the cycling function is still one of my favorites. The continuous alteration of the speed and intensity of the vibrations keeps your toes curling.

The toy is relatively quiet, and the sound level is fairly typical for a small vibe. However, if the cap gets just slightly loose during use, it starts making this crazy clacking sound, though mine has only done it a few times. The best way to avoid it would be to make sure the battery cap is screwed on tightly before you turn it on. When it does start making the clacking noise, you have to actually turn the toy off, re-tighten the cap, and then turn it back on. I’ve never been able to stop the noise while the vibrator was running. As I said before though, it rarely happens and can be avoided by checking the cap before use.

This toy is so easy to clean and care for! You can wash it with antibacterial soap and warm water, wipe it down with isopropyl alcohol, or use a toy cleaner if you prefer. As with any battery-operated toy, take the batteries out for cleaning and leave them out during storage to prolong the life of it. This toy is supposed to be waterproof, but from my experiences I wouldn’t go submerging it with batteries in! Don’t try boiling it or putting it in the dishwasher either. The Groovies Wave is compatible with both water-based and silicone-based lubricants. Storage is a breeze as well: just remove the batteries and keep them in a safe place, away from dust and dirt (and the kids!).
Follow-up commentary   I don't like it anymore 3 months after original review
Sadly, my cute little vibe broke after only a few months of use. It'll run for a little while and then it turns itself right back off. It's disappointing but not unexpected given the price. Still great for a cheap first vibrator but don't expect a long term toy.
This content is the opinion of the submitting contributor and is not endorsed by EdenFantasys.com